★★☆☆☆
Given a somewhat ill-timed release last year by world cinema distributor New Wave Films, Ibrahim El-Batout’s Winter of Discontent (2012) is a passionate, if tonally muddled take on the anti-Mubarak Egyptian uprising of 2011. With Mubarak now released from prison after serving his sentence and protests against those who replaced the former president ongoing (and as bloody as ever), there’s certainly an appetite for politically astute think pieces. Unfortunately, El-Batout doesn’t seem to know whether he’s making a dour slowburner or a pacy thriller, so confused is his approach towards depicting his country’s recent troubles. 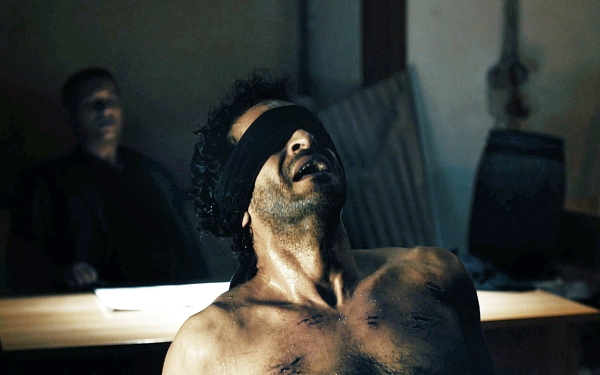 The central focus of Winter of Discontent (El sheita elli fat) are the protests that took place in Cairo’s Tahrir Square, which began on 25 January 2011 (here, genuine footage taken at the time is blended with El-Batout’s fictional narrative). Dividing the story into three, we follow the daily lives of domineering activist Amr (Amr Waked), investigative journalist Farah (Farah Yousef) and State Security officer Adel (Salah Al Hanafy) as revolution begins to grip the city. With government forces a perpetual menace – especially for the forthright Amr – we’re given a snapshot of just how dangerous and unstable a nation Egypt became in a relatively short period of time, affecting each and every one of its citizens regardless of political allegiance.

Not dissimilar in some ways to Pablo Larraín’s excellent No (2012), Winter of Discontent certainly isn’t lacking in emotional and moral complexity. What it does lack, however, is the patience to really delve beneath the front page headlines and offer its audience more than just a superficial dramatisation of recent global newsworthy events. Too often, El-Batout’s flounders between being a decent political drama and a decent political thriller – a Jack of both trades, but master of neither.

Whereas Larraín’s rally cry managed to make the thrilling dramatic and the dramatic thrilling, Winter of Discontent dawdles along towards a hopeful – and now outdated – conclusion. The Egyptian Spring obviously has much to offer in terms of both factual and fictional-based discourse. It’s a shame, then, that this particular film squanders the opportunity to really lift the lid on life during times of such social upheaval, rushing to document rather than pausing to analyse. Heartfelt it may be, but El-Batout’s cinematic account is already beginning to near redundancy.