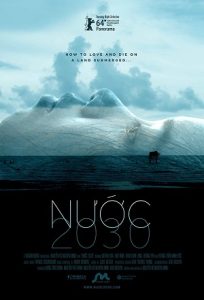 In recent years, climate change has become one of the dominant themes of dystopian film narratives, reflecting a growing acceptance that global warming isn’t merely the stuff of science fiction. Nguyễn-Võ Nghiêm-Minh’s Nuoc 2030 (2014) is a near-future parable set in a world where rising seas have displaced the majority of the Vietnamese population into a new floating society. An ambitious eco-thriller boasting some fine production design, Nuoc fails to anchor the forced melodrama to its ecological core. Sao (Quýnh Hoa) and her husband, Thi (Quý Bính), have found a way to carry on amidst this new equilibrium. 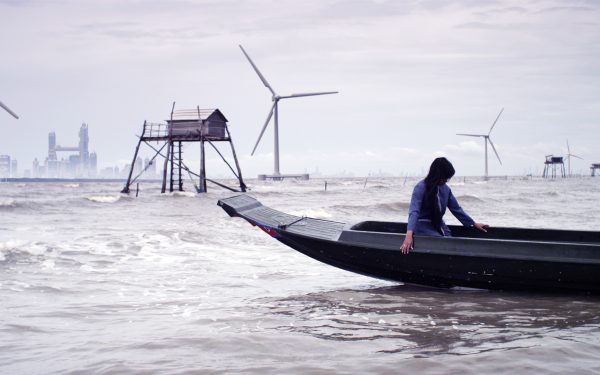 Living in a stilted house where there home used to be, whilst existing on a diet of fish and prudently cultivated vegetables, the pair manage to struggle by in a world where fresh water is as precious as gold. However, when Thi is found murdered, Sao senses foul play. Taking a job at the neighbouring floating farm that she believes is responsible for her husband’s death, Sao discovers that the agrarian cultivation factory is actually owned by her former lover. Constructed around a non-linear narrative that weaves its way back and forth through time, Nghiêm-Minh’s well-meaning Nuoc attempts to recreate the search for truth in the global warming narrative by fashioning a film noir mystery submerged within a post-apocalyptic Asian backdrop.

A canvas of cobalt and azure, Nghiêm-Minh’s maritime dystopia is truly remarkable. Enhanced by an astute eye for composition and a bracing score of harsh, relenting gales, there’s no denying that Nuoc is a film of extreme beauty. It also boasts a luminous and compelling lead performance from Hoa, whose stoicism and warmth affords this sci-fi a brief pardon. We feel and understand her plight, yet remain bemused by her actions as the film plunges to the murky depths of erroneous melodrama. Sadly, a banal script fails to replicate the same degree of ingenuity and craftsmanship, lacking in tension and built around an implausible romance devoid of credibility.

There’s a clear lyricism to Nuoc’s sinuous, underwater ballet of nature and humanity entwined, yet this same grace and elegance is entirely lacking from the film’s trite narrative. Bathed in a sea of ineptitude, Nghiêm-Minh manages to highlight the global concern over rising water levels whilst simultaneously struggling to enrich its poetic narrative into anything remotely necessary to the climate change debate. Bogged down, as it is, by contrived conspiracy theories and a frankly unbelievable romantic subplot, Nuoc 2030 ultimately finds itself rudderless and adrift in a sea of post-apocalyptic contrivance.