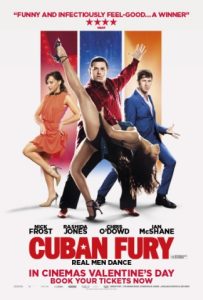 Having made many an entertaining comedy in his collaborations with Simon Pegg and Edgar Wright, Cuban Fury (2014) marks Nick Frost‘s first bona fide solo outing. Directed by newcomer James Griffiths, it’s a feel-good, if predictable offering. Initially conceptualised in a drunken email Frost sent to his producer, the film centres on Bruce Garrett (Frost), a former teen salsa champion who hung up his dance shoes after a bout of bullying. Cut to the present day and Bruce, who has since become overweight, now spends his days working a mundane 9-5 job whilst being bullied by his smarmy colleague Drew (Chris O’Dowd). 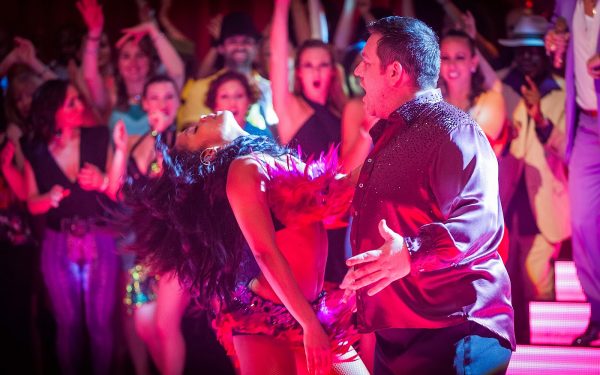 When it becomes apparent that his boss Julia (former Parks & Recreation star Rashida Jones) also has a passion for salsa, Bruce is encouraged by his sister Sam (Olivia Colman) to dust off his dancing shoes and gain her interest. There is little by way of surprises in what follows, but while the screenplay from Jon Brown is filled with all-too-generic characters, its core messages of being yourself and stepping out of your comfort zone are heart-warming and relatable ones. The manner in which they are delivered is extremely heavy-handed, but it eventually resonates. Additionally, the colourful dance sequences inherent in the film’s final third are suitably lively, and if nothing else Frost deserves massive credit for learning his salsa moves.

There are a few deep-seated problems. Griffiths’ Cuban Fury seems so preoccupied with Bruce’s arc that at times the romance between Bruce and Julia feels more like an afterthought, so few and far between is the time they spend with one another. With so little to play with, there isn’t much chemistry to speak of, and what should be a relationship we’re rooting for instead becomes one we’re waiting to reach it’s inevitable conclusion. As for the comedy, it’s very hit and miss. Save for one hilarious, if out of place dance-off sequence, O’Dowd’s Drew is rarely funny, and the near-constant barrage of mean-spirited jokes quickly grates.

Thank goodness, then, for Kayvan Novak. As Bruce’s camp salsa buddy Bejan, the Four Lions star is on scene-stealing form throughout with a host of perfectly timed one-liners that keep the belly laughs coming thick and fast. In his first leading role, Frost – playing the straight man once again – lets his natural likeability shine through to good effect in a wholly committed turn. Though it’s nothing we haven’t seen in many a dance film before it, spirited performances help make Cuban Fury an amiable rom-com, and proves that Frost can carry a film on his lonesome.