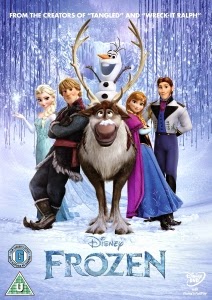 Disney’s animated juggernaut Frozen (2013) comes to DVD and Blu-ray with a weighty reputation already in place. Critically lauded, a runaway box-office hit, and a double-winner at this year’s Academy Awards (for Best Animated Feature and Best Original Song), Frozen has rightly been hailed as one of Disney’s best animations for years. In the kingdom of Arendelle, two princesses, Elsa (Idina Menzel) and Anna (Kristen Bell) are kept separated and behind closed doors by their parents after Elsa accidentally harms her younger sister with her magical ice powers. When Elsa’s secret is finally revealed, she flees the castle, casting the kingdom into a cursed winter.

Anna is sprightly and tough while Elsa is withdrawn and fretful, but the contrast in the characterisation and interaction between the two leads is what powers Frozen to a level above other films aimed at similar audiences. There is not a single moment or story move that doesn’t feel earned; each new scene and plot development grows out of the characters wants and fears, as established in the opening few minutes. That doesn’t mean there are no surprises: Frozen keeps a couple of neat twists back for the final third, including a face-heel-turn that’s bound to catch first- time viewers out for years to come. The film is also populated by some great supporting characters, each of who bring something different to the proceedings.

There’s the surly Kristoff (Jonathan Groff), who aids Anna on her quest; Prince Hans (Santina Fontana), for whom Anna falls at Elsa’s coronation; and Olaf (Josh Gad), a seemingly totally incongruous sentient snowman that should have been a swing-and-miss and somehow ends up being a delightful, hilarious home run. Directors Chris Buck and Jennifer Lee (both awarded ‘Story by’ credits along with Shane Morris, with Lee given sole credit as a writer) rarely go in for flashy ‘camera’ moves (is it still conceivably a camera movement if the film was in fact made entirely with a computer?), but nevertheless display a real knack for visual storytelling. This is particularly true of several of Frozen’s barnstorming chase sequences.

Early musical number Do You Want to Build a Snowman? condenses the sisters’ journey from childhood to adolescence and then adulthood via a tragic event that really stings. It’s not over-praise to liken this sequence to the great opening montage of Pixar’s Up (2009). While not all of the film maintains this level of brilliance, Frozen is consistently fun, and often very moving. Aside from the film’s signature tune Let It Go, the aforementioned Snowman, and Olaf’s song In Summer, most of the musical numbers are merely decent, and there none at all in the final thirty minutes. That doesn’t prevent Frozen from being a charming, sincere animated adventure with a warmth that should melt the iciest of hearts.