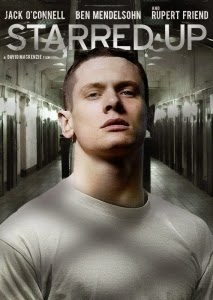 ★★★☆☆
Having paced the peripheries of the British film industry for over twenty years (going all the way back to his striking 1994 debut Dirty Diamonds), director David Mackenzie appears to be on the verge of bagging his first mainstream hit. His latest feature, the gritty prison drama Starred Up (2013), comes armed with a fine cast, topical subject matter and just enough subversion of a well-worn genre stable to please those exhausted by mindless gangster slash ’em ups. Rising star Jack O’Connell (recently seen in swords and sandals sequel 300: Rise of an Empire) plays 19-year-old Eric Love, a violent and troubled teenager making the difficult transition from a Young Offender Institute (YOI) to adult prison.

Destined to lead a miserable life behind bars at Her Majesty’s pleasure, the prison’s unconventional yet kindly therapist (a delicate turn from Rupert Friend) appears determined to help Eric find a way through, assisted by of one of the prison’s longest-serving inmates, the omnipotent Neville (Animal Kingdom’s Ben Mendelsohn, here sporting a British accent) – who also happens to be Eric’s father. However, not even the respected Neville is lord of this particular wing, taking orders as he does from bespectacled kingpin Spencer (a suitably sinister Peter Ferdinando). After a violent altercation between O’Connell’s teen miscreant and a fellow inmate leaves the latter on life support, the powers that be begin to question the “starred up” (a term for kids too volatile for YOIs) Eric’s usefulness to the wing.

As has often been the case since his breakthrough role in Channel 4/E4 teen series Skins, it’s O’Connell who once again catches the eye. Wound up like a mistreated pitbull, ready to rip out the throats of those who dare cross his path, Eric perfectly encapsulates everything that’s both right and – more often than not – everything that’s desperately wrong with the country’s penal system. Having quickly outgrown the confines of his previous habitat, Eric is metaphorically thrown to the lions, asked to fend for himself in a world perpetually on the cusp of spontaneous and sporadic savagery. The first thing we see our protagonist do is construct a makeshift shiv for protection against those who would wish him harm. Violence begets violence in Mackenzie’s cold concrete jungle, with compassion from his tearaway father and other tentative allies fleeting at best.

Having constructed such a dramatically enticing set-up, it’s thus disappointing to see Mackenzie fall back on familiar generic tropes with such a frustrating sense of inevitability. As Eric gradually begins to bond with his estranged, chain-smoking pa – Mendelsohn’s English accent straining on occasion, but not so much as to break the illusion – a previously unseen sentimentality rounds off some of Starred Up’s challenging, harder edges. Relationships between inmates are addressed yet never truly explored, whilst for every cathartic therapy session there’s another five-or-so minutes of routine macho posturing. That balance between kitchen sink realism and something that goes beyond has historically proven hard to find, but Mackenzie stumbles at the final hurdle – like a remorseful con who offends again the day before release.