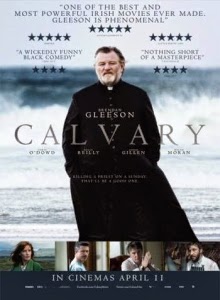 Two years on from the success of his quintessentially Irish buddy movie The Guard (2011), John Michael McDonagh reunites with Brendan Gleeson for Calvary (2014) – an acerbic yet wryly humorous study of faith and the vilification of Catholicism that laudably displays the good the bad and the ugly side of organised religion. “That’s certainly a startling opening line” ripostes Gleeson’s surly father on hearing the declaration that “I first tasted semen when I was seven-years-old,” from the individual in his confessional box. This confrontational introduction sets the tone for McDonagh’s self-referential black comedy, the line delivered surreptitiously from behind the wooden lattice by Gleeson’s future murderer. 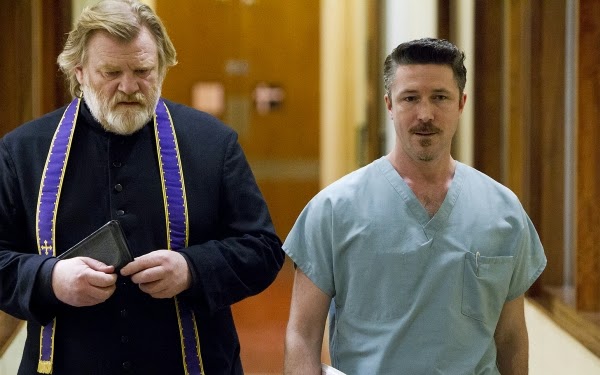 The anonymous assassin announcing he will take the priest’s life the following Sunday, believing that killing an “innocent” priest will have more impact than a bad one. Having been given a week to put his house in order, Gleeson spends the next seven days tending to his flock, permitting the audience the opportunity to observer the town’s peculiar inhabitants. Whilst consoles his visiting daughter (Kelly Reilly) whose arrived after a failed suicide attempt, Gleeson must decipher who his secret assassin is. From the town’s cuckolded butcher (Chris O’Dowd) and his coquettish wife (Orla O’Rourke), to her immigrant lover (Isaach de Bankole) and the hospital’s repugnant surgeon (Aiden Gillen), we ponder who in this town of sinners holds the bullet with the priest’s name engraved upon its casing.

There’s often too much talk about sins and not enough about virtues when it comes to the Catholic Church. Adultery, paedophilia, pre-marital sex, suicide and even felching feature on the list of cardinal sins encompassed by Calvary, highlight the diminishing sway of religion in contemporary society. Once again positioning his lacerating wit against the picturesque backdrop of County Sligo, McDonagh’s secular whodunit transcends its generic plot device (the confessor’s voice is so recognisable it renders any investigation redundant) and laudably attempts to create a more transcendental, yet tragically droll study of spirituality. Struggling to uphold a sense of decency and decorum in a world of villains and the ubiquitous vilification of the church, Glesson is a warm, yet stoic presence in a town that, through its unnaturally clean lines, idiosyncratic characters and introspective protagonist feels like the setting of a manicured Aki Kaurismäki film.

Despite McDonagh’s needlepointed barbs and highfalutin tomfoolery, Calvary does at times struggle to balance its solemn tone with its volatile macabre comedy; its sardonic wit diluted by erroneous scenes of contrived sentiment (is that Enya we can hear cascading from the sweeping wide-angled shots that resemble a Visit Ireland advert?). The lyricism of the script lacks the naturalism of McDonagh’s previous work and though the majority of the prose flows well, it feels like frantically scribbled poetry falling off the margins of the page. By interchanging bawdy gaiety and a ponderous attitude to emphasise the film’s spiritual message, Calvary feels extremely disjointed, struggling to balance its dualistic tone on top of its oversized ensemble cast. It’s a brave leap of faith, taking a weighty subject and approaching it in such a brash and unflinching manner, but whilst McDonagh lands the dismount, you can’t help but notice a slight wobble of uncertainty.