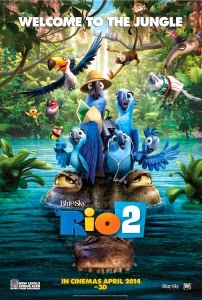 With the eyes of the world fixed on Brazil ahead of this summer’s World Cup, animated sequel Rio 2 (2014) swoops into cinemas looking to once again put the country on the map for all the right reasons. Whilst the illegal wildlife trade was a passing concern of the first film, the more prominent issue of deforestation now comes into play for returning director Carlos Saldanha’s colourful follow-up. Unfortunately, whereas Blu’s (Jesse Eisenberg, in his second film this week) Rio homecoming offered considerable warmth – if little of note besides – Rio 2’s Amazon adventure finds its wings clipped by more tired and unnecessary subplots than you can shake a feather at. 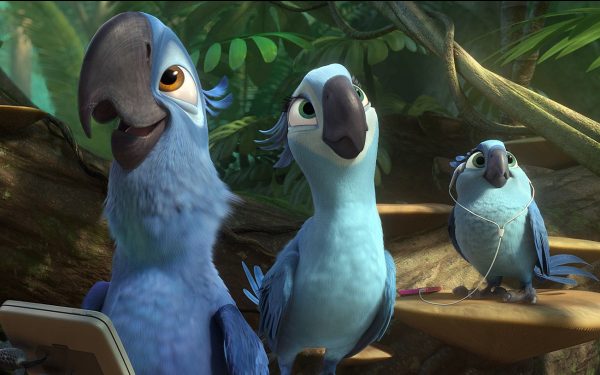 Blessed with three rambunctious chicks and an idyllic home in a Rio de Janeiro bird sanctuary – thanks to humans Linda (Leslie Mann) and Tulio (Rodrigo Santoro) – Blu and mate Jewel (Anne Hathaway) have everything they could possibly want. However, when it transpires that there may be other endangered Spix’s Macaws living deep in the heart of the Amazon, the free-spirited Jewel manages to convince her jittery beau to take a walk on the wild side. Accompanied by bird-brained companions Nico (Jamie Foxx), Pedro (Will.i.am) and Rafael (George Lopez), Blu and family must come to terms with long-lost family members, a distinct lack of creature comforts and the skulking malice of thespy cock(atoo) Nigel (Jemaine Clement).

New additions to the voice cast this time round include a typically gruff Andy Garcia as Blu’s doubting father-in-law Eduardo, US singer Bruno Mars as preening parrot pin-up Roberto and Kristin Chenoweth as poison arrow frog Gabi, who harbours an unhealthy (and impracticable) interspecial infatuation with the Shakespeare-spouting, Iago-aping Nigel. Sadly, none of the aforementioned trio make their mark on what is very much a paint-by-numbers second franchise outing. As was the case with Saldanha’s Rio, it’s really only Clement’s vengeance-craving Nigel that will linger in the memory. His signature song is once again the highlight, even if it is a somewhat lazy cover of a disco classic (Gloria Gaynor’s I Will Survive) with a fine sprinkling of Flight of the Concords-esque lyrical witticisms (“If you try to cut me short, I’ll just come back longer / If you beat me at ping pong, I’ll just play ping ponger”).

The maniacal Nigel aside, there’s scant substance to set apart Rio 2 from almost every other non-Disney/Pixar mainstream animation of the past few years. Its ecological concerns (Blu’s new rainforest home is under threat from logging) have been explored far more fruitfully in Bill Kroyer’s FernGully: The Last Rainforest (1992), whilst the most patronising of the film’s core messages – “Happy wife, happy life.” – is hardly a progressive principle to be teaching its undoubtedly intelligent target audience. It’s this fundamental underlying underestimation of young cinemagoers that separates Saldanha’s two efforts; whereas the former celebrated the conquering of one’s fears, the latter shoehorns in an X Factor-style talent show to commend the crucial cultural contribution made by reality television. As the once twee, now plainly irritating Will.i.am himself once questioned: “Where is the love?”