Life is “nasty, brutish, and short” wrote Thomas Hobbes, the author of the philosophical and political work from which Andrei Zvyagintsev’s Leviathan (2014) takes its name. Returning to Cannes this year (Elena was in the Un Certain Regard strand in 2011), Zvyagintsev’s latest is a powerful and compelling retelling of the biblical Book of Job, transplanted to a small town in Russia. Kolia (Alexei Serebriakov) is a mechanic who’s gotten himself mixed up in a legal dispute with the town’s powerful major, which could see him lose his house and his land. Kolia is no angel, however; he’s a veritable hothead who likes his vodka, is quick to lash out at others and constantly complains about his perceived lot in life.

The disputed house in question is in a fantastic location, overlooking the village and the bay, with huge windows revealing the beautiful views but also suggesting vulnerability and exposure. A bridge can be seen from his vantage point crossing the bay and transitions are going to be unexpected and multiple. His wife, Lilya (Elena Lyadova), works in the fish factory with the sort of placid stoicism that doesn’t bode well, whilst Kolia’s teenage son from a previous marriage, Roma (Sergei Pokhodaev), stays out late, drinking with his pals in an abandoned church and resenting Lilya’s presence. An old friend from the army, Dimitri (Vladimir Vdovichenkov), has become a lawyer in Moscow and is visiting in order to assist Kolia in his legal woes. He’s put together a dossier on the corrupt mayor Vadim (Roman Madyanov), but neither Dimitri nor Kolia have taken into account the extent of the corruption and the extremes to which Vadim is willing to go. 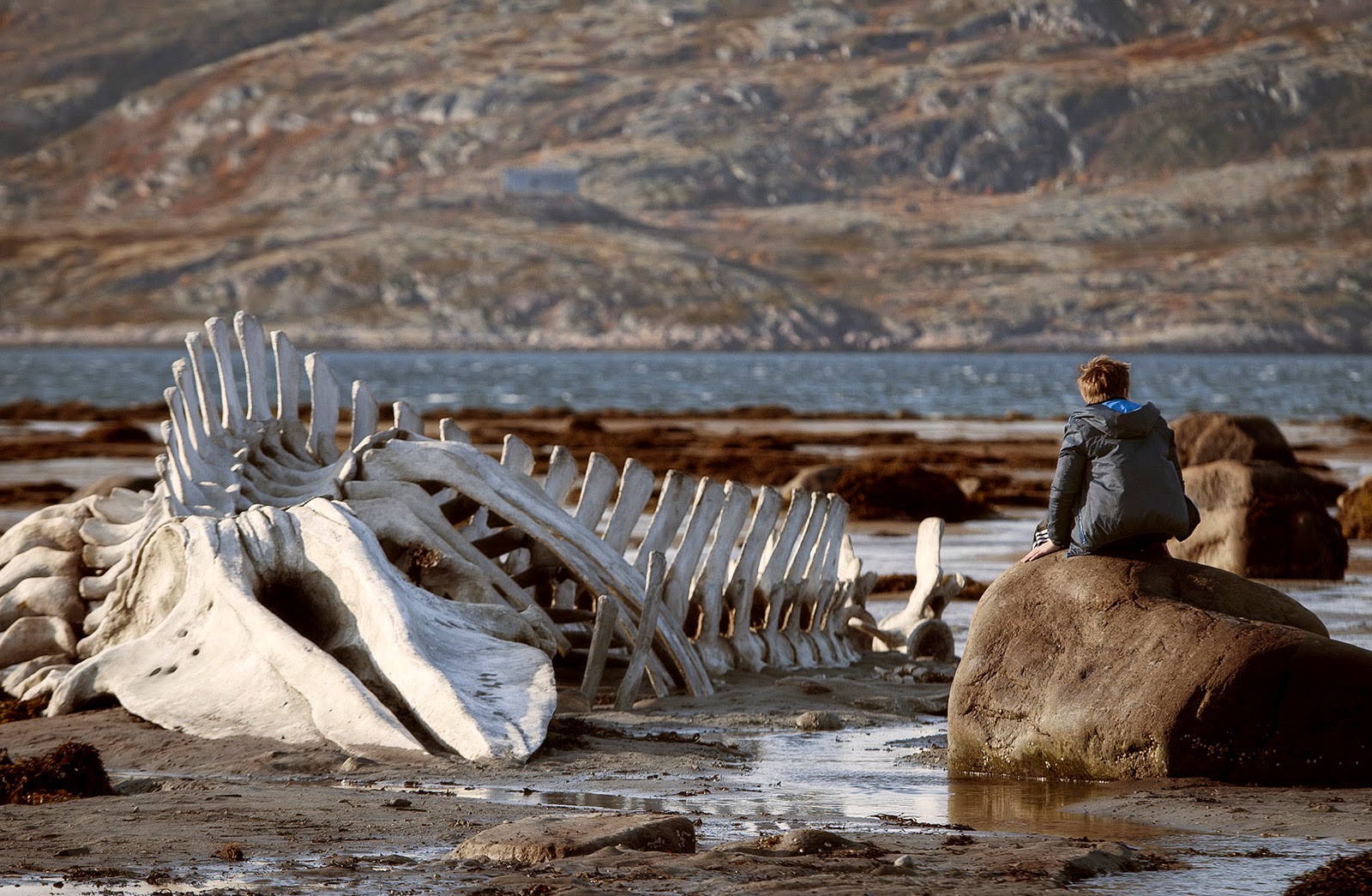 With a booming opening and closing theme by Philip Glass, the waves crash against the slabs of the shore, suggesting a relentless natural world of conflict and bracing winds. Initially, Zvyagintsev stages his drama and Kolia’s plight as a bitterly funny comedy. Lilya’s friends Pasha (Alexei Rozin) and Angela (Anna Ukolova) are a double act and Major Vadim is a buffoonish character; almost a caricature, he’s a drunken glutton keen to eat up all the land and vindictively crush anyone who dares to oppose him. The hearing for the land dispute is read through at speed by the presiding judge and a drunken picnic progresses hilariously, as the friends get drunker and the comedy broader. However, a revelation at the picnic will see Kolia’s situation worsen and the lives of those around him alter dramatically/tragically.

“Got any more contemporary targets?” Kolia asks his friend as they set up old portraits of Soviet leaders to use for target practice, with his comment is a declaration of intent. The crushing of Kolia happens as a result of his inability to concede defeat to forces much more powerful than himself. In this case, the force which destroys his life is not God – as in the story of Job – but the Russian state as represented by Vadim. Even the Moscow-based modernism represented by Dimitri proves not only inadequate to the task, but naïve and, by the end, treacherous. Zvyagintsev’s condemnation is total: the church, the state, the police the judiciary are all complicit. Even Kolia, with his feckless impatience and his alcoholism, is not above censure, though his punishment is a disproportionate and unjust annihilation. Leviathan undoubtedly has the weight of a grand Russian novel, even though Zvyagintsev leaves out some key scenes.

This restraint doesn’t allow for a consoling mystery (things might not be so bad), but rather presents us with gaps in are knowledge which we can easily guess at. In fact, the ease with which we can guess shows how much we have understood about this world. And yet, Zvyagintsev’s pessimism is leavened both by his comedy and his sense of beauty. Mikhail Krichman’s cinematography captures the sublime grandeur of the landscape against which the nasty, brutish and short lives are played out. The play of light on the mountains, the rain and mist of the Kola Peninsula are all used to optimum effect. The bones of a huge creature lie on the beach – initially threatening us with mortality – but by the conclusion of Leviathan the image appears more consoling, as if the shortness of our lives might in fact be something of compensation for the brutishness and nastiness of the world we live in.

Leviathan featured in CineVue’s ‘Best films of 2014’ feature. You can read the full list here