Though crime capers often have their characters participating in dishonourable actions, there’s commonly a likable, redeeming quality to them that makes them easy to root for. This fundamental building block is nowhere to be found in Julian Gilbey’s Plastic (2014), which makes the entire film tedious to sit through. Wannabe entrepreneur Sam (Downton Abbey star Ed Speleers) is the leader of a four-man gang of credit card swindlers whose other members include Rafa (Sebastian De Souza), Yatesy (Alfie Allen) and right-hand man Fordy (Will Poulter). When the arrogant Yatesy unknowingly steals from ruthless gangster Marcel (Thomas Krestchmann), the team are blackmailed into raising £2 million in two weeks. 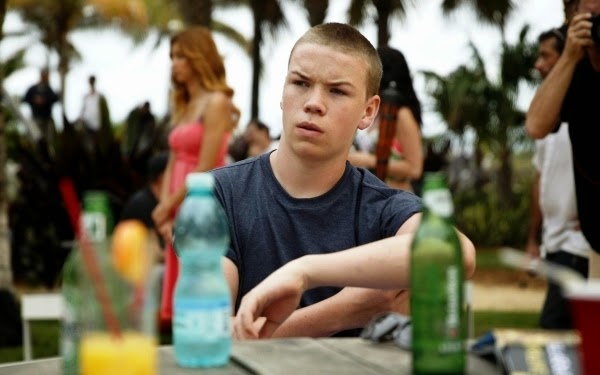 Recruiting bank employee Frankie (former Hollyoaks actor Emma Rigby) to their cause, the group head to Miami looking to rip-off the big spenders and pay their debt before it’s too late. We’re told at the outset that Plastic is based on a true story, but as it goes on there’s a mounting sense that the inspiration taken from it must be very minimal, such is the increasing incredulity of what transpires on screen. It’s one of those massively fanciful films where the myriad of coincidences continue to pile up, leading to a laughably over-the-top finale complete with cartoonish caricature villains and slow motion shootouts. The core foursome are also grossly underwritten – family and friends outside of the ragtag team are never mentioned – and any injection of energy isn’t sustained for long enough to raise the pulse.

Most damning of all, however, is that the justification for our protagonists’ actions – which ultimately boils down to the economic recession and a lack of jobs – feels like an afterthought, explained away in no more than a couple exchanges of dialogue. It’s one of many reasons why our group are so detestable, another being their often manipulative and misogynistic tendencies. At times, you’d be forgiven for rooting for the villain. It’s a shame, because there is the odd moment when the cast show their appeal, often coming from Speleers and the always reliable Poulter. On the flipside there’s Rigby’s turn as Frankie, the only positive takeaway being that it might be used as exhibit A for how not to treat female leads for future filmmakers. Witless and predictable, Plastic is about as disappointing as British cinema gets.