Exhibition (2013), the latest film from British auteur Joanna Hogg, is a mysterious work that poses provocative questions about how we relate to the people and spaces around us. While most of the industry is mired in what director Mike Figgis once called “kitsch ‘n’ sink”, Hogg is making original, formally adventurous works that burrows deep into the English metropolitan psyche. The trajectory of the characters in Exhibition is elusive; we may be witnessing disintegration, stasis or progression. Hogg’s brilliance lies in the way she muddies the lines between these states, and how the amorphous outside forces of London can prompts a form or modern urban anxiety that bears down on our relationships. CineVue’s Craig Williams recently spoke with her about her brave new work.

Craig Williams: You’d been familiar with the house shown Exhibition for years. Was that the genesis of the film or did the decision to set it there come later?

Joanna Hogg: Different elements came to mind at different points. When I decided on a story about two artists living together, the first place I thought of setting the film was this house that I’d been to in the early nineties. I knew the house because I knew the architect James Melvin who built it for himself and his wife in 1969 after their children had grown up and then, some years later when I conceived the story of Exhibition, it was a question of negotiating to use the house for the film. But I was so attached to the idea of this particular house that, had the owners turned around and said it wasn’t possible to make the film there, then I might have re-thought my story in a way. 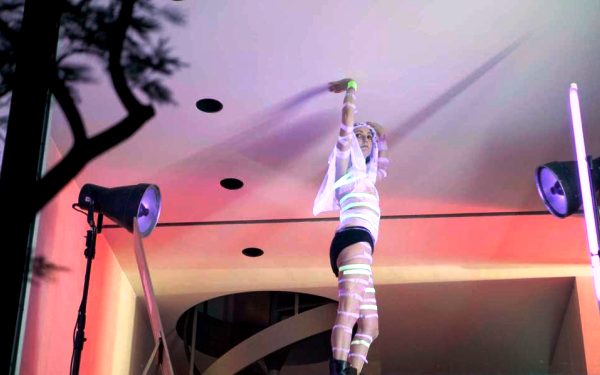 CW: You prompt a lot of questions about how we relate to the spaces around us. Was this a conscious decision?

JH: That came out of exploring ideas of what it means to be in love with a building. I was quite interested in the syndrome of people who become infatuated with buildings. There’s a famous case of a woman who fell in love with the Eiffel Tower and married it. I was sort of interested in how we become attached to the places in which we spend time and live in. It’s a blurring between the occupants and the house itself; how the house can envelop you. It’s about becoming attached to a place you’ve lived in for a long time and the resistance to moving away from somewhere you love, almost as if the building or house is one’s skin.

CW: The lives of Londoners is something that’s explored in all your films, but this is the first you’ve set there. How was shooting in your home city?

JH: It was much easier than I’d expected. I’d been warned by a couple of friends who’d made films in London that it would be hard and that it was very difficult filming in the street. I like setting up a camera in a public situation. I don’t use extras; I just use people who are already there in that place I’m filming. I was warned that it was difficult to do that; that you’d have people looking in the camera and you’d get bothered by people in the street. But I actually didn’t find that was such a problem. Most of the film is set within the house so one’s actually creating one’s own private domain for the filming. Then, when we were out and about, it seemed relatively straightforward and we got permission to film in the area where the house is and so we didn’t need new permission each time we wanted to put a tripod down on a pavement.

CW: Exhibition evokes so many different elements of London. What kind of image do you think the film projects?

JH: I suppose the easiest way for me to answer that is to say how I wanted to depict London, or what the London is that I wanted to express. I find London quite an anxious place to live in; there’s a constant sound of sirens and there’s always a feeling that something could potentially happen. Those are my personal feelings. I’ve lived in London for many years and, increasingly, as I get older, I think one becomes a bit more sensitive to these things. It would be nice to live somewhere where I wasn’t hearing or seeing ambulances up and down the road. That anxiety that one feels; I wanted to express that. But I was interested to express it more in sound than in image because that’s often how I experience it personally. You can hear a sound and imagine all sorts of different scenarios in one’s head. Usually, those scenarios are totally imagined. I wanted to convey this feeling of being on the edge of something and feeling anxious that something could happen.

CW: Was it important for you to explore the tribulations of everyday life as an artist?

JH: It was but, unlike my other two films, I was interested in exploring the artist’s imagination; the ideas of reality but also of dream and memory, and not making a very clear delineation between what’s a dream and what’s real. I also think that life is like that; that it’s hard to say what’s really happening when there is so much going on inside our heads. I wanted to create a story that could reflect some of those ideas that I had been wanting to express.

CW: Do you think that art is immediately compromised as soon as it’s separated from the process of creation?

JH: In the case of D, I don’t think she quite feels robust enough with her work to be able to discuss it with her husband. He is an artist himself and is much more confident in his work. I don’t think he understands her difficulty in communicating what she’s doing. For him, that’s probably how he likes to form his work – by discussing it and having a certain intellectual rigour about it. But she is worried that if she vocalises her ideas, he’ll trample on them. I think it’s to do with a lack of robustness, but then I think she gains strength and is eventually able to talk to him about what she’s doing and will probably find that it improves the work. It’s good to talk about what one’s doing.

CW: Did you need to have a clear concept of D and H’s history in your head in order to direct Liam and Viv?

JH: I’m not interested in back story really; only enough to help me imagine the story. I can see that it’s frustrating for some people when they see the film in that they want to have concrete notions of why these two artists are as they are. People want to know why they are doing something or what happened in their past etc. It’s true that I’m more interested in the quality of the interactions between them; saying something rather than being able to rely on a plot point or back story. I find that, then, all the focus goes into that rather than into observing something more subtle. I suppose therein lies the frustration for some people.

CW: Some people have seen the film as an unflinching portrayal of a marriage and others have seen it more about a couple on the brink of disintegration. How do you personally view D and H’s relationship?

JH: I see it as the realities of a relationship that is eighteen years old. Communication is not always going to be good. Sometimes there’ll be frustrations, arguments and disagreements. But there are also going to be more loving moments and I’m just trying to reflect the ebb and flow of what happens in a relationship over that period of time. I think that there’s always a tendency in a film to put a label on a type of relationship or a type of marriage. It must be a good marriage because it’s lasted that long. I’m just trying to depict something more real than perhaps we’re used to seeing.

CW: One can sense a breadth of influences in Exhibition that stretch across various art forms; from literary to architectural. Is that the case?

JH: It’s interesting. I had to do an interview the other day and I realised that I was bringing up influences that I haven’t brought up before. Whenever I’m thinking about an idea or developing a story, I’m reading so many different things and I’m seeing so many different things. I can’t reduce it to just a few influences. With Exhibition, there were many different things I was reading as I was starting to write the story. I would emphasise reading rather than seeing; I tend to read books. I find that more inspiring when I’m writing for some reason. Also, I resist seeing too many other films because I’m hoping to do something that stands on its own two feet and is different in some ways to what’s already been made. There’s no point in making films if you’re just copying what others have done in the past.

I try not to watch films at that point when I’m feeling most sponge-like, soaking in lots of influences. Books that I was reading at the time were Gaston Bachelard’s Poetics of Space which helped me think about the house as a living organism in a way; a house that’s been lived in for a number of years does become a vessel of memory and feeling. So I found reading that book very inspiring. There were also other old favourites like Robert Bresson’s Notes on Cinematography. I’m also looking at art, at the work of Louise Bourgeois for example. She did a series called Femme Maison which was about woman and building integrated; woman as house. So there were many different things floating around. I also co-run a film club called A Nos Amours and we will be showing things there that will have some influence.

CW: A Nos Amours is one of the best repertory projects in the capital. Do you think its importance will continue to increase as cinemas continue to place less emphasis on repertory programming?

JH: I think it’s very important. I also think it’s particularly important to younger generations who haven’t been exposed to the rep cinema that I was exposed to in the early eighties. London was a very different place then, showing a much wider variety of film at all times of the day and night. And now, there are younger generations who don’t know who Chantal Akerman is, for example. It’s not just an educational thing, it’s also about valuing cinema culture and protecting one’s livelihood in a sense.

CW: On that note, how likely is it that we’ll get to see Jacques Rivette’s Out 1 soon?

JH: [Laughs] That’s one of our missions. It’s a kind of archaeology getting hold of some films and it can be really frustrating, but we’re very stubborn and, if we want to show something, we will hopefully show it eventually. Out 1 is proving to be particularly challenging.

Joanna Hogg’s Exhibition is out now on DVD & Blu-ray. To read our five-star review of the film, simply follow this link.