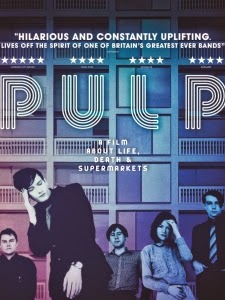 Far from an overnight success, Sheffield-based group Pulp originally formed in 1978, but only achieved major recognition in the nineties with their unique brand of indie disco that included big hits such as Babies, Common People and Disco 2000. They became a staple of the Britpop movement, selling over ten million albums worldwide, but always remained faithful to the place of their humble beginnings. Florian Habitcht’s Pulp: A Film About Life, Death and Supermarkets (2014) documents the story of the band as they prepared – during their 2012 comeback – for their final hometown show, utilising live footage and interviews to shed some pragmatic light on this most British of cultural phenomena.

Stories are told against the backdrop of a bustling market entrance, a dilapidated warehouse and a city of industry crushed by the Thatcher regime. Captured with true northern grit, this Sheffield is a crumbling citadel full of salt of the earth types and pop heroes who aren’t too successful that they can’t change their own car tyre – demonstrated expertly by charismatic frontman Jarvis Cocker during the film’s introduction. Common People, the band’s career-defining hit, is the first live performance; as the song approaches its peak the sound gently fades, only to be continued by a local harmony group. Habicht’s doc is very much about the people that inspired Pulp’s music – the ‘common people’ themselves. Sycophancy simply doesn’t exist in this city or in the confines of this film. Instead, what’s documented is a celebration of the band’s solid foundations and the very root of their lyrical inspiration.

Habitcht’s voice of authority occasionally emerges from beyond the camera to direct or question his non-media-trained subjects. Two children, listening to Pulp for the first time, dish out some valuable parental advice and reveal what it’s like to grow up in the North and decaying landscape aside, it’s surprisingly far from grim. The director’s enthusiasm and excitement for his subjects can be heard in his Kiwi twang. The non-investigative approach to documenting the band’s story draws out some optimistic and inspiring stories from those who wander the city’s market place. The sound-bites are often hilarious when they miss the mark. Habitcht has a great knack for choosing valuable and raw subjects and handles them with great respect and affection – you couldn’t make these people up.

Archive footage of the band’s earlier live performances give some scope to their journey. Keyboardist Candida Doyle tells of the days when times were so hard that they created their stage regalia using kitchen foil and attempted – and failed – to make their own dry ice (only a plateful at that). Pulp’s back catalogue warms the nostalgic cockles as it’s drip-fed throughout and during some mesmerising concert footage that serves to remind how captivating a performer Cocker can be. Cover versions from Sheffield Harmony and a heartwarming rendition of Help the Aged in a café illustrate the rewarding influence the band’s success have had on the community. One would perhaps expect a Pulp documentary to focus on Cocker and give insight to the man behind the performer but this documentary is not the platform for such. Instead the focus is spread evenly, ensuring that each of the band members get equal recognition for their part played.

Pulp tells a commendably humble story of a band and the city that inspired their music. They’re a band of the people and like its many of the remarkable subjects documented here, they have no heirs, graces or delusions of grandeur. The group’s incredible live performances speak for themselves and without the blowing of proverbial trumpets. Subtle suggestions reflect Pulp’s largely unspoken phenomenon as Jarvis emerges, ten million albums and a sell out comeback tour under his belt, through a thick cloud of properly formed dry ice, into the film’s neatly framed conclusion and to the cacophonous roar of a proud hometown singing wholeheartedly as Common People reaches its peak. This isn’t just a film about a band; it’s the story of Sheffield as only Pulp – with a little help from Habitcht – have the capacity to tell.