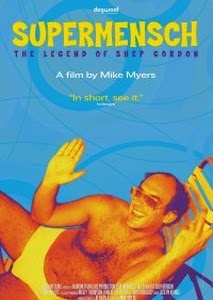 In his 2002 documentary The Kid Stays in the Picture, Robert Evans proclaimed there are three sides to every story: “My side, your side and the truth. And no one is lying. Memories shared serve each differently.” In Mike Myers’ directorial debut (which he co-­directs with Beth Aala), Supermensch: The Legend of Shep Gordon (2013), the titular Hollywood man about town gets his day in the limelight. Standing over six feet in his stocking feet and looking and sounding not dissimilar to Larry David, Shep Gordon is an entertainment legend. A colossus within the fields of talent management, film producing and cooking he has excelled in a field where being the nice guy normally means finishing last.

This is no Sammy Glick or Ari Emanuel/Gold, more a benevolent mensch who through success let others add the prefix ‘super’. Mensch is a German word, which in Yiddish means “a good person”. A mensch has the qualities one would hope for in a dear friend or trusted colleague; and what is apparent throughout the film that Gordon fits those categories completely. He seems to glide through his existence not quite believing how he become to where he is. Starting out as a fresh faced hippie newly graduated from the State University of New York with a degree in Sociology he was going to be a Probation Officer for Juvenile Delinquents, but that didn’t work out as planned, so he headed to LA. Life is full of luck and forks in the road that don’t appear in the present but only retrospectively.

The first monumental decision was where to stay. Gordon plumped for the Landmark Hotel, for the sole reason he’d heard it was a party hotel. It was here where he befriended every hip musician who passed through LA in the late sixties/early seventies, from Jimi Hendrix to Janis Joplin. From low level drug dealing at Hendrix suggestion he starting managing some of the arts passing through (he managed Pink Floyd for just over a week). However, it’s Alice Cooper with whom Gordon is most closely associated, taking him from lowly beginning on Sunset Strip to megastar. From music it was cinema, where he set up the first US Independent Film Company: Alive Films, where he produced films that included Kiss of the Spider Woman and The Duellists. Gordon says of Alive, “We were Miramax before Miramax.”

After cinema, Gordon semi-retired to Maui, where he operated a open house to friends and colleagues wanting a break, he would proceed to cook and care for them and send them back to the grindstone reinvigorated. The film abounds with tales that include his many relationships, his search for a family, a near death experience, his friendship with the Dalai Lama and how he managed to bump start the celeb chef circus. Never outstaying its welcome, Supermensch is akin to spending a hour and half in the presence of a true raconteur. If The Kid Stays in the Picture was a Faustian tale masquerading as a Horatio Alger story, Supermensch: The Legend of Shep Gordon is a delightful enjoyable romp through the salad days that represent one of the good guys who came, conquered and gave back.

Supermensch: The Legend of Shep Gordon is released in UK cinemas this Friday. For more info, visit dogwoof.com.