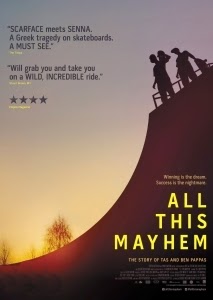 The pursuit of freedom is a learned rite of passage handed down to youthful exuberance. These freedoms often take the shape of kinetic apparatus given to children, whether they be skateboards or bicycles. In The Armstrong Lie (2013), Lance Armstrong talks about a bike being a child’s first grasp on the idea of independence. The skateboard takes that and moves it within a different paradigm. Outside the culture while evolving it’s own organically grown counter-culture, skateboarding is now part of the mainstream. All This Mayhem (2014) examines at pair of young Australian ‘bogans’ from a poor suburb of Melbourne who completely shook up the hegemony of the American-dominated boarding culture.

The two brothers who are the centrepiece of Eddie Martin’s documentary are Ben and Tas Pappas, the aforementioned bogans who left Australia in their teens with the dual objectives of being the best vert skaters and “smashing [Tony] Hawk”. They accomplished both aims and caused mayhem and destruction, both to others and themselves. One of the many things All This Mayhem does is to lift the lid off the debauched lifestyles professional skaters live. Tas’ part on the legendary skating video Let the Horns Blow (1996), which was predominantly street skating, was almost solely responsible for reviving the dying art of vert skating. In All This Mayhem, Tas and others reveal that Tas’ whole bit was produced in one take whilst he was on mushrooms, a fact which becomes more astonishing the more you watch.

From this platform the two brothers continued their rise, which culminated in Tas becoming world champion and beating Hawk in the process. What follows is drug abuse, death, prison, a subculture destroyed and the Pappas brothers locked out of the sport they love. All This Mayhem captivates not only in its energetic style of storytelling but the also thanks to the charisma that exudes from the mouth of Tas as he honesty tells his side of this doomed Shakespearean tale. Always truthful and never self-serving, it’s a tale that will make most (especially those new to the story) gasp in shock, anger and emotion at where these two bogans ended up and how that road has dealt them a deal mitigated by hubris to allow one of them a hopeful future. We’re also left to wonder at what might have been and what has happened to the Pappas’ culture of rebellion which is now used to sell computer games and to make Brady Brunch manqué millionaires.