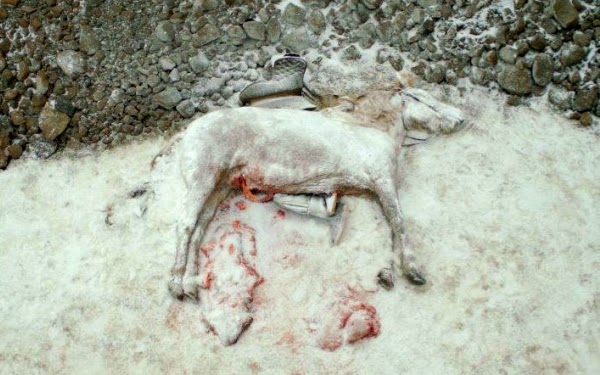 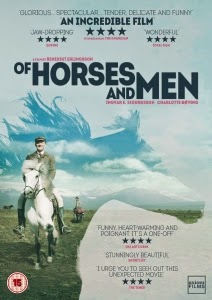 Benedikt Erlingsson’s widely acclaimed, award-winning debut feature Of Horses and Men (2013) is as unique and clever as its subject – the Icelandic horse. As well as their distinctive faces, shaggy mane and tails, these small, sturdy beasts have two specific gaits – in between a trot and a gallop. Although pony-sized they are always referred to as a ‘horse’, so there’s much comic potential to be had from pairing a long-legged Icelander with this diminutive equine exhibiting the very fast ‘flying pace’. Set in a small rural community various stories overlap, each featuring a specific horse. Kolbeinn (Ingvar Eggert Sigurðsson) proudly rides his new grey mare to have coffee with his neighbour, Solveig (Charlotte Bøving).

Solveig and Kolbeinn are clearly attracted to one another, reflected in the excitement the latter’s black stallion displays towards the former’s mare – with disastrous consequences. Elsewhere, another Icelander grabs a wild horse and leaps into the sea to purchase vodka from a passing Russian trawler. One farmer’s partitioning of public land with barbed wire causes bad relations with a neighbour and ends in tragedy. A young Swedish girl proves her skills as a horse- woman and trainer. A Spanish tourist nearly dies after becoming lost in a snow storm. The farming community avidly follow their neighbours’ fortunes and failures, even going so far as to spy on each other through binoculars. Although not all the four-legged creatures meet a happy end, Erlingsson’s film is a tribute to the fortitude and spirit of this trusty steed.

At the same time, Of Horses and Men also offers a delightfully skewed portrait of his country and culture. By the end, the locals have forgotten their various resentments and unite for herding season. It’s a glorious spectacle watching them ride together in order to drive the wild horses into a corral where they are then hand-picked for breaking-in. Cinematographer Bergsteinn Björgúlfsson trains his camera on the horses offering close-ups of their hair, mane and finally their eyes which reflect their owners and imply we are being given the animal as well as human perspective. It’s a film full of surreal tableaux – a horse mounting another while its owner is in the saddle; rider and horse swimming in the ocean; a young man emerging from the stomach of a slaughtered horse; and a couple copulating in a valley as their horses look on. The Icelandic landscape forms a dramatic backdrop to these memorable, blackly comic tales about love, obsession, and equine passions.

You could win a copy of Erlingsson’s Of Horses and Men with our latest competition. Follow this link to enter.