The last few years of Conservative government have provided ample opportunity for the left-leaning to condemn the Oxbridge elite prevalent in the higher echelons of British politics. Taking up that cause is An Education (2009) director Lone Scherfig’s bright young toffs drama The Riot Club (2014), based on Laura Wade’s West End play Posh. Starring a host of upcoming actors, it provides a peek behind the curtain of a fictionalised version of Oxford University’s Bullingdon Club of which Prime Minister David Cameron, Mayor of London Boris Johnson and Chancellor George Osborne were all members. It makes for entertaining viewing but its power is undermined by a ultimate lack of insight amongst the debauchery. 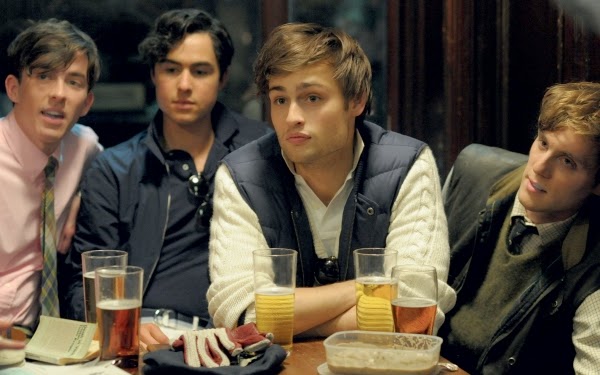 The revelry begins at the start of term when the club find themselves two short of the requisite ten members and are forced to recruit two ‘grasshoppers’. Miles (Max Irons) and Alistair (Sam Claflin) are both new History undergrads – who meet the requisite criteria of wealth and an education at a select group of schools – and are duly initiated. One of their notorious annual dinner parties provides the thrust of the narrative as the ten young men travel out to a quiet and trusting country pub dolled up to the nines and with excess on their minds. As the evening wares on, events spiral out of control with shocking consequences. The central dining sequence – which forms the basis of the original stage production – is superbly executed, the chip on Alistair’s shoulder growing heavier with each new class of champagne.

Though the likes of Douglas Booth (as the group’s heartthrob) and Natalie Dormer (as a high-class call girl) are hardly stretched, the performances are uniformly good and the two leads are able to anchor the action admirably. Sebastian Blenkov’s cinematography is also fabulous, lending the film a suitably decadent air when necessary and making the most of Oxford’s dreaming spires while he can. The main problem is that in amongst all of this there’s little room for any real exploration of character or class, save for the most cursory observations. The purpose of the film is to illustrate the destructive and inculpable nature of these entitled reprobates, yet as proceedings escalate to ever more outlandish levels the real issues – and deserved indignation – are lost in the hyperbole. The Riot Club is a welcome attempt to rail against aristocratic entitlement and makes for a compelling watch; it’s just a shame that the message is drowned in the bacchanal.

This review of The Riot Club was originally published on 7 September as part of our full Toronto Film Festival coverage.