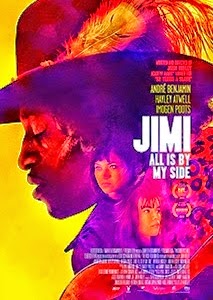 John Ridley’s Hendrix biopic Jimi: All Is By My Side (2013) is an intriguing shambles of a film. Denied rights by the Hendrix estate, the film looked doomed from the get go. This legal imposition turns out to be by the by, and the fact Jimi doesn’t bang out tune after tune from Hendrix’s greatest hits collection is the least of Ridley’s worries. Nonetheless, there is some enjoyment to be harvested in the notable performances of a cast that includes former Outcast member André Benjamin in the title role. Ridley decides to focus on Hendrix in his pre-fame years between 1966-7. Hendrix is 23, and making a living playing in New York’s numerous back-alley bars and music halls as a backing guitarist. 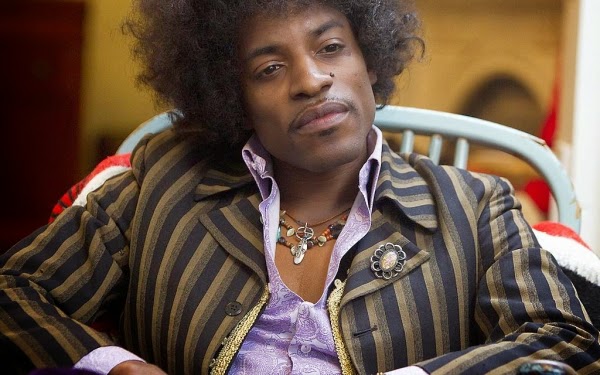 A chance encounter in the Cheetah Club leads Jimi to model and socialite Linda Keith (Imogen Poots). Poots is compelling in the role of Keith, rendering her as a ferocious figure who passionately fights to get Hendrix heard. Desperate to put Hendrix’s talents out there, she whisks him to London with the aid of former Animals manager, Michael Jeffery (Burn Gorman). Once in England, Hendrix encounters Kathy Etchingham (Hayley Atwell), a groupie who wins his affection, much to the chagrin of Linda. Whilst the absence of copyrighted material would be detrimental to any musical biopic, the lynchpin of Ridley’s film is a deep examination of Hendrix’s troubled relationships with these two women. Here we have a vision of Hendrix as a man ruled by the woman he loved, yet conflicted by a desire to create great music.

There has been much made of the film’s public legal wranglings, so much so that it has almost become a bore. However, it is easy to see why the Hendrix estate refused the use of his music. Jimi is a blunt portrayal of a complex figure that lacks nuance, happy to wallow in sensationalism rather than revel in facts. The greatest disappointment here is that whilst Benjamin totally embodies the spirit of Hendrix – bursting from the screen with flare, charisma and dynamism – the performance he gives is far greater than the story it’s contained within. Perhaps most uncomfortable of all are the directorial choices. Awkward jump cuts and odd freeze-framing employed to clarify members of the 1960s Rock and Roll scene feel stilted and incredibly patronising. It is as if Ridley gracelessly attempts to deny the tropes of the genre whilst appropriating the very worst of them.

Worse still, Ridley seems to lack the knack of subtly. Two scenes stick out rather uncomfortably. The first involves Jimi violently attacking Kathy in the street, an incident that has been denied by the real Kathy Etchingham. Historical truth has little to do with fictional films, even biopics, yet this scene jars compared with the previous portrayal of the character. The second involves a conversation between Jimi and Michael X, where the latter tries to convert Jimi to join the Black Power Movement. In both cases, Ridley fails to establish a motive for including these scenes within the context of the narrative framework. Jimi appears so terrified of convention that the film wanders carelessly between fact and fiction, unsure of the Jimi Hendrix it wishes to explore, and conversely ends up saying very little.