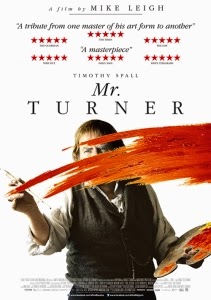 We see a long shot of two maids, rapt in their whispers, walking down the length of an embankment. The first flickers of dawn are in the air; the promise of a new day. The camera pans to the left and we see our artist at work, magnificently silhouetted against the horizon in a quietly euphoric panorama. This glorious opening is the perfect summation of Mike Leigh’s excellent J.M.W. Turner biopic Mr. Turner (2014), his first period piece since 1999’s Topsy-Turvy. This perfectly controlled shot prefaces the unusually rough beauty of the picture. We’re naturally stunned by its evocative depictions of the bucolic glory around us, but we’re equally touched by the small detail of life’s currents beating in its midst. 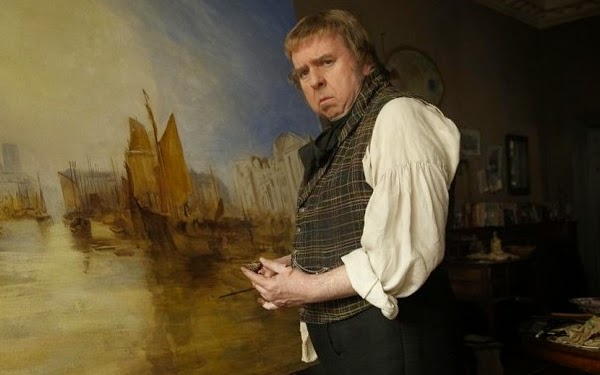 Mr. Turner – starring Timothy Spall in the titular role – is a work that sees Leigh finding the ideal balance between the intimate and the epic. It’s a film that focuses on the detail of human interaction and the minutiae of an artist’s craft, but these moments take place against a broader canvas that captures the tenor of the times and what it meant to be a living, working artist in the tumult of the industrial revolution. England was changing at a frightening pace, and Leigh’s Turner is a man adept to the times, content to be drawn along to the beat of encroaching modernism while keeping his countenance in tune with contemporary society. Spall is on top form, imbuing Turner with an earthy but articulate sensibility. He grunts and mumbles but is apt to launch into eloquent, if antiquated modes of speech.

We get the sense of a man dedicated to his art, pushing it to deserved eminence within the right circles. Not a schemer necessarily, but certainly a player. There’s no pretence to Turner, nor are there any hang-ups or anxieties. He appears comfortable in his own skin and, crucially, in his work. Diligence appears to be ingrained in his very being. Mr. Turner represents the rugged edges and frayed fringes of the period drama. Leigh is far too good to simply fall in with the inconsequential pomp and artifice of the BBC’s increasingly wearing approach to the format. His picture is faithful to the rarefied manners of the era, but gives its characters the breadth to be real, recognisable human beings rather than simple composites of aspirational national fantasies. It’s this mastery of tone that makes it work so well; it places Turner and his circle on our emotional wavelength. The British film industry is so mired in inflated self-confidence that celebrations of mediocrity are by now de rigueur. However, in the middle of the swathes of chaff, Mike Leigh is a true English master.