DVD Review: ‘Dawn of the Planet of the Apes’ 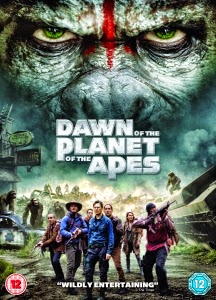 ★★★★☆
Memories of Tim Burton’s woeful 2001 Planet of the Apes remake were thankfully replaced with far fonder recollections in 2011 following the release of Rupert Wyatt’s Rise of the Planet of the Apes. An earnest entry in the flagging sci-fi franchise and a surprise hit at the international box office, a sequel was quickly green-lit with Wyatt once again penned in to direct. After dropping out of the project due to a conflict in vision with 20th Century Fox, Wyatt was replaced by Matt Reeves (Cloverfield, Let Me In) who, with Dawn of the Planet of the Apes (2014), not only carries on the torch of series rejuvenation but has also crafted an eminently darker, grey matter-stimulating post-apocalyptic follow-up sure to please fans.

Ten years have passed since ape figurehead Caesar (Andy Serkis returning as the man behind the pixel mask), the unexpectedly enhanced product of genetic tests into a cure for Alzheimer’s by the nefarious Gen-Sys corporation, led a band of altered primates across the Golden Gate Bridge and into the relative safety of the redwood forest. Humanity has declined in the interim, teetering on the verge of extinction after the destruction ravaged by Simian Flu – a deadly aversion to the very drug that has given Caesar and their kin an evolutionary boost – and a decade of petty in-fighting. Fighting for their species’ existence are Malcolm (Jason Clarke) and Dreyfus (Gary Oldman), who have singled out a power station in ape territory as their only shot a survival. But will Caesar and his kind grant right of way?

An undoubted hindrance to Wyatt’s forebear was its largely underwhelming human cast, with only John Lithgow’s sympathetic turn as an Alzheimer’s sufferer able to match that of Serkis and his digital cohorts. This time around, Reeves makes the wise decision to sideline humanity from the off, with far more time spent focusing upon Caesar’s harmonious ape republic and the conflicts that inevitably arise once contact with their one-time masters is re-established. Besting even Serkis’ Caesar in terms of character complexity is the wonderful Koba (Toby Kebbell), unquestionably one of the most sophisticated creations yet offered up by motion capture technology. A Brutus-like figure, Koba wears his experiment scars proudly but finds himself unable to even consider peace between apes and humans (“Caesar loves humans more than apes!”, he claims, signalling the beginning of the end). This decorated general’s tumultuous relationship with his beloved captain is also, remarkably, one of the most compelling seen in any feature film this year.

A satisfying balance of family drama, political intrigue and all-out action (an ape cavalry charge has to be seen to be believed) do, in truth, only constitute half of the story, as Reeves’ sci-fi sequel is as much a technical triumph as a narrative one. It’s hard to believe that, only three years on from Rise, the digital creations of Dawn could look as photo-realistic as they do, and a huge amount of credit is due not only to the visual artists but also Serkis and his team of mocap actors. For every dopey line of human dialogue (“I don’t take orders from monkeys!”) there are a host of telling, non-verbal glances between the ape cast. The very fact that the film is so reliant on sign language (subtitled, naturally) is in itself a mainstream achievement comparable with that of Wall-E’s rightly lauded dialogue-less opening. Humanity may have been wiped out countless times on screen by all manner of plagues and wars, but rarely has the future after our reign looked so optimistic. However, with a third and final (?) prequel on the way, do expect a nuclear-powered finale.

This review was originally published on 16th July 2014 for the film’s theatrical release.