Film Review: ‘Get On Up’ 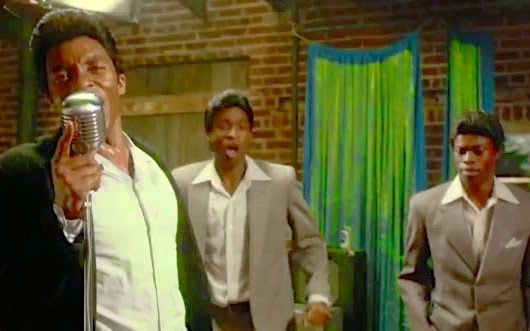 Chadwick Boseman’s portrayal of James Brown, in Tate Taylor’s candid biopic, Get On Up (2014), is a bold, brash and innovative rendition of a man who was often perceived as all ego. He was a market-machine of tremendous talent at the forefront of music, making you love him with the fury of a hellfire preacher trying to convert a sinner. He was also a man who never really confronted the horrors of his upbringing, preferring to perpetuate and live by his own myth, remaining a childish, though never innocent, man, who wanted the love of everyone without being capable of giving it back. We meet Brown in 1988, hunched shoulders and showing signs of age.

High on drugs, he shuffles into his prefab office and burst into an insurance seminar next door. Brandishing a shotgun he shouts; “I own this building, someone has been in there and used my commode! Now who was it?”. This, by any standards, can be considered an unconventional and strange opening to a biopic. Yet, this scene establishes the tone of a film that hopscotches through the mad and bizarre life of one of the music industry’s most influential figures. Indeed, there’s a strangely arresting narrative structure to Get On Up, which charts Browns rise from a backwash hut in Carolina to the height of his fame. It purposefully attempts to detour from the run of the mill music-biopic tropes and structure, yet also adheres to many of the rules- the troubled childhood, the dogged determination, and the element of luck.

The effect is an arresting encapsulation of Brown’s dichotomy of being at once a soulful singer and at the same time a man incapable of showing affection. The editing may feel awkward to some, yet this strange approach echoes the erratic nature of Brown’s mind. In the scenes set in Southern Carolina, we encounter a boy desperate to escape the poverty and racial abuse of his surroundings. From an early age he shows a determination to live and breath the self-perpetuated myth that propelled him into the spotlight. The most potent scene in this period is when, as a young teen, James steels a pair of two-toned shoes from a victim of a lynching. This summarises neatly the hostile race relations that Brown experienced throughout his life whilst also highlighting Brown’s desire to become a showman – whatever the cost.

Dan Ackroyd, who worked with Brown whilst making The Blues Brothers (1980), stars as Brown’s manager, the Brooklyn-born Jew Ben Bart. His role makes for an interesting contrast and companion to the musician, almost suggesting a potential father figure Brown never had. Flying to meet President Lyndon Johnson, Bart lays it on the table for Brown who, in 1968, found he was caught between advancing his career by keeping the white powers that be on his side and his association with the Black Panthers. At the end of the film Brown sings ‘Please, Please, Please,” pleading to his long-time friend Byrd (Nelson Ellis) “Hold me. Hold me. I want you right by my side.” This painful entreaty shows Brown, faults and all, as a man who struggled to love those he should care for, preferring the adoration of the crowd. Get on Up is an uplifting watch, but you can’t help but feel haunted by the price it cost Brown to succeed.