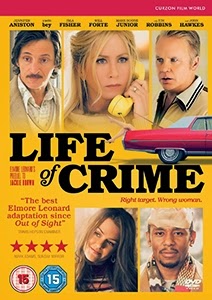 Based on Elmore Leonard novel The Switch (presumably the rather prosaic retitling was to stop confusion with star Jennifer Aniston’s 2010 comedy of that name) Life of Crime (2013) actually received a limited cinema release, although upon viewing, you’d be forgiven into thinking you had just witnessed a straight-to-video feature. Despite a fine and very able cast, this a plodding and mostly characterless affair. The DVD cover art makes reference to the film being a prequel to Jackie Brown (1997), although this is a spurious claim (the respective sources share a couple of characters) and comparisons between the two only underscore the superiority of Tarantino’s adaptation.

Using the narrative springboard predominant in much of Leonard’s work in the crime milieu, a seemingly simple plan goes awry when two small-time ex-cons, Ordell Robbie and Louis Gara (Mos Def and John Hawkes, reprising the roles which Sam Jackson and Robert De Niro made their own in Jackie Brown) see their clear cut kidnapping scheme turn complicated. The duo’s target, Mickey Dawson (Aniston), is the exasperated wife of a wealthy businessman (Tim Robbins) who expresses little concern when he learns that his spouse is being held to ransom. That’s because he’s a remorseless philanderer in the midst of asking for a divorce so he can swan off with his younger squeeze (Isla Fisher). The crooks have to regroup when they realise that what they’ve abducted is essentially a void bargaining chip.

Life of Crime‘s unremarkable script is sorely missing the kind of fun Leonard touches which have chimed with a cinema audiences in the past – namely the snappy, knockabout dialogue and a strong attention to character detail, be it the major figures or those on the periphery. More than anything, it lacks pizazz and the uninspired direction from Daniel Schechter means there’s never any tension or sense of danger when it comes to Mickey’s predicament. Mos Def (performing here under the moniker of ‘Yasiin Bey’) isn’t offered the opportunity to explore that quiet menace that Jackson brought to the character. Hawkes fares marginally better, showing more chemistry with Aniston than he does with his partner-in-crime. A thoroughly workmanlike adaptation, Life of Crime fails to breathe life into the colourful exploits of Leonard’s rich assortment of ne’er-do-wells, representing a disappointing cinematic swan song for a huge talent.