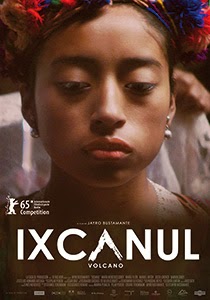 Jayro Bustamante’s debut Ixcanul (2015) is a profoundly humanistic inquiry into the trafficking of Mayan children in North America. Focusing on the daily rituals of the victims, rather than the machinations of the crime, Bustamante has crafted an ashen-hued, anthropological portrait of indigenous life in Guatemala that deftly balances tragedy, humour and tradition. Maria (Maria Mercedes Coroy) is a soon to be wed, 17-year-old Kaqchikel Maya living in the shadow of the Ixcanul volcano. She works on the coffee plantation her parents manage, herding livestock, picking coffee beans and helping her mother with chores. The volcano looms ominously in the background, serving as forewarning of the evil ahead.

The tranquillity is shattered, however, after a late night dalliance with a childhood sweetheart leaves Maria in a precarious situation – one that puts her life and that of her family in jeopardy. Drawing from his own experiences of growing up in Guatemala, Bustamante has crafted a heartfelt and sincere paean to his homeland. Ixcanul possesses a palpable sense of place, immersing the audience into the ritualistic routine of the small community without ever leaning towards sentimental idolatry. The dichotomy between tradition and modernity is only fully realised during a tense excursion to the local hospital. Switching from the warmth and elegance of the plantation to erratic handheld camerawork, Bustamante’s immersive approach leaves the audience desperate for the safety of the hinterlands.

Ixcanul’s best quality is empathy for its characters, evident primarily in the relationship between Maria and her mother. This is where the film’s delicate and most poignant moments are conceived. Focusing on this hardy maternal bond allows the film to explore the traditions and ancestral of the community it presents in a pragmatic fashion, exploring the development of a belief system and how they have evolved in the face of increasing globalisation. Whilst it magnificently captures the intimate, once the film’s larger themes become more transparent the magic begins to dwindle. Commendable for presenting the power of bureaucratic corruption alongside the hereditary belief in the divine reckoning of the gods equally, the viewer is invited to ascribe their own interpretation of the belligerent force that strikes Maria. Sadly, the narrative contrivances that compromise the final third feel a little too rote and lacking in clarity, especially compared to the weightless charm of what proceed them. Ixcanul may struggle to tackle the larger issue it posits but well represents the lives and rituals of the marginalised community it seeks to give a voice.