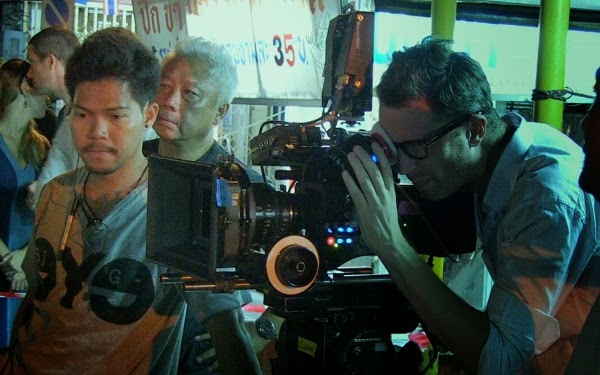 Liv Corfixen’s My Life Directed by Nicolas Winding Refn (2014) starts from the unfortunate position of being wide open to comparison with another behind-the-scenes peek, Eleanor Coppola’s Heart of Darkness: A Filmmaker’s Apocalypse (1991). Where that film followed the incredible disasters that befell Francis Ford Coppola’s Apocalypse Now (1979) shoot, this documents the far less eventful making of Danish enfant terrible Refn’s Only God Forgives (2013). While Corfixen’s film – clocking in at just under an hour – is little more than a DVD extra, it’s also an intimate look at her husband’s struggle with artistic satisfaction and her own with a life indentured to his blossoming career.

Having had to battle to make movies over the past decade, ‘Jang’ has been away for vast swathes of time. The couple have now decided to move their young family (including two nippers) to Bangkok for six months while he films his follow-up to the smash hit Drive (2011). The expectation weighs heavily on him and, in a moment only a wife’s probing camera could capture, he lies wrapped in a duvet revealing his anxieties that this film is far less commercial than his last. Cult Chilean director Alejandro Jodorowsky (honestly) does a tarot reading for Refn and expresses concern that he thinks too much about success. He strains against the labels that Drive has given him: “Lars isn’t ‘the guy who made Breaking the Waves,” he complains. Jodorowsky’s comical tarot cameo singles out Corfixen as her husband’s ‘helper’.

Even in her first shot in Bangkok, Refn suggests that film out of the window and pan to him working; the documentary’s title clicks slowly into place. In fact, though, aside from a refusal to let her film him during an on-set crisis, Refn is surprisingly candid and it’s when he confides in her that My Life grabs its unique insights. He talks about needing to appear confident on set to keep the crew calm and she catches his swinging mood; “It’s better than Drive” becomes “It’s a bad film” in a matter of hours. There is lighter material. Ryan Gosling’s appearance shows the warm, affectionate relationship he has both with Refn and the family. He looks to the camera consolingly as the director begins a familiar speech on the kinship of sex and violence, and the two of them embark on a humorous sideshow to raise $40,000 by introducing a Drive screening. Jodorowsky raises a titter when he returns for Liv’s tarot reading and proposes that she must divorce Nicolas to be free. That’s obviously not an option, but My Life Directed by Nicolas Winding Refn illustrates the difficulty of living with a partner whose career is “so big”. It may be slight and ultimately inconsequential, but it’s an interesting peek behind a neon curtain and should please Refn regarders.