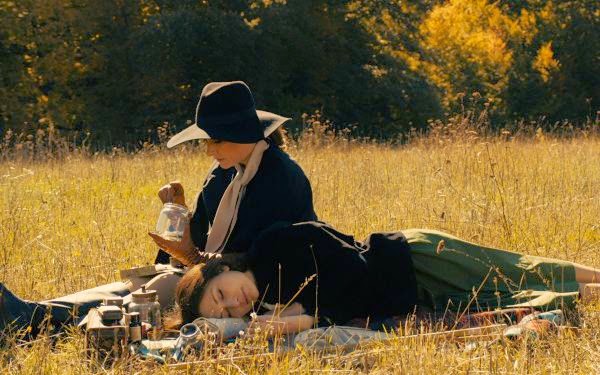 “It’s a love story, really,” says Peter Strickland when we caught up with him in London late last year and asked him to tell us about his latest film, The Duke of Burgundy (2014), a wonderfully kinky exploration of a sadomasochistic relationship. “It’s a domestic drama that has fallen out of the hands of a sleazier genre, perhaps. But really, it’s circling these ideas of consent, compromise and coercion and observing two people having very different intimate needs and is it possible to make it work.” It’s a more intimate beast than his previous two works, Katalin Varga (2009) and Berberian Sound Studio (2012), and it riffs on the sexploitation films of the seventies. Burgundy began life as a commission from Andy Stark and Pete Tombs of Rook Films. They wanted him to helm a remake of Jess Franco’s Lorna the Exorcist (1974).

“Initially I was into it and then I thought ‘what’s the point of doing a remake? Scrap that.’ Actually, I don’t know that much about those films – I mean, I know a little but – but what I’m aware of is that it’s frowned upon, that world. Italian horror is acceptable now, but sexploitation? No, you have to go to the Charing Cross Road and those book stores to get those films – you can’t get them in Fopp – so they’re disreputable which instantly appealed to me. I love a lot of those films and I’m not just talking about Franco but [Walerian] Borowczyk too; everyone slags off La Marge (1976) with Joe Dallesandro and Sylvia Kristel but it’s got some phenomenal moments in it. Okay, Emmanuelle 5 (1987), I’m not so sure about that [laughs], but it’s wonderful that Borowczyk did Emmanuelle 5. I’d love to do Emmanuelle 19. I kind of like that idea.”

“I think what Franco had – and I’m focusing on Franco, but the early seventies films in general, not the later ‘woman in prison’ stuff which I’m not such a fan of – they’re just kind of Gothic and strange and unlike anything else.” That certainly seems to be the direction taken by Strickland with Burgundy which is likely to be unlike anything else that audiences will have the pleasure of seeing in theatres this year. This is by no means a mere imitation of those earlier movies, though, as with his approach to genre in his past work, he once again twists away from expectations. “What I wanted to do was take some of the basic elements – such as the female lovers, the stereotype of the sadomasochism – and peak behind the curtain a little bit. Catch them out of character; catch the dominant woman in her pyjamas.

That’s what’s interesting to me, to see them miss their cues to punish someone, or unable to piss on someone.” Within that relationship between his two characters, Evelyn (Chiara D’Anna) and Cynthia (Sidse Babett Knudsen), Strickland probes the realities of such contrived power dynamics. This is particularly evident in scenes that see Cynthia demanding a massage outside of the orchestrated narrative of Evelyn’s sexual fantasies. “It seemed to make logical sense because when Cynthia does truly dominate [Evelyn] – in the pyjama revenge scene – it’s truly traumatic for [her]. She loves giving back rubs or foots rubs, but only when it’s on her terms. When Cynthia really needs a back rub, she’ll do it but just get it out of the way quickly.” Such sequences contain a natural humour to them, something which audiences may not expect before going in. “We’re laughing at the practicalities of it. The tone was the hardest thing to get, but I think if you do it too seriously, especially sex – I don’t know what it is with sex, maybe it’s just that we’re British – you just laugh, don’t you? We think it’s just so embarrassing and bad – but again, if you try to cover your embarrassment people might cringe and that’s even worse. So it’s trying to play it as straight as possible.”

“I think the films I was influenced by were quite psycho-sexual and quite dark, even the films which are highly regarded. Franco’s films – I love a lot of them – but sadly they’re not really yet to reach the pantheon. Sight & Sound did do an obituary for Jess Franco, but the good examples are Claude Chabrol’s Les Biches (1968) – that ends up in very dark territory in the end – and Fassbinder’s Martha (1974) – which is probably the darkest one on that subject, it goes way beyond consent. But I didn’t want to go there. For me, they are consenting lovers, it’s something within that. The boundaries are a bit wobbly because of the coercion, but what I’m trying to communicate – or question, might be a better way of putting it – is that isn’t that how, even beyond the bedroom, those things seem to be in relationships.”

All of this manoeuvring takes place in intoxicating environs, set in a nondescript European country. It is a ravishing film that owes a lot to its aesthetic to formulate its atmosphere. “This is a film of the senses: a very tactile film; a very sensual film. We tried to pay attention to textures a lot, whether it’s butterflies or underwear in the sink – even though I stole that from Planes, Trains & Automobiles (1987) when Steve Martin picks up John Candy’s pants in the sink; a more sensual version of that. I guess it all depends on the film, really, and I wouldn’t want to go as far as John Waters did with Odorama for Polyester (1981) – I mean, I think it works perfectly for that film, but it would have felt like a gimmick for this film. Part of it is serving the film, but partly I get off on that in cinema in general. As you’ve probably guessed, I’m not a big plot person, I love placing different emphasis on sensory things, and on visceral things, and experiencing a film. Not necessarily striving for meaning or going for character arcs – they don’t really interest me so much.”

Peter Strickland’s The Duke of Burgundy is out now in UK cinemas. To read our review of the film, follow this link.