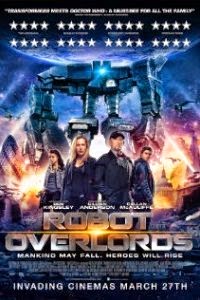 At a point in Jon Wright’s Robot Overlords (2014), Robin Smythe – the film’s human Big Bad played by Ben Kingsley – asks “You know what ‘chav’ stands for? Council house and violent.” It’s delivered in an unsure northern accent that straddles the uneasy border between old foes Lancashire and Yorkshire (particularly odd given that he’s from Salford). It’s a strange socialrealist beat to put in Robot Overlords, which is otherwise a Children’s Film Foundation lark with sometimes impressive special effects and super-sized ambitions on a modest budget. Robots from outer space have taken over our planet. The paranoid androids have also taken the liberty of attaching electronic devices to the necks of the populous. 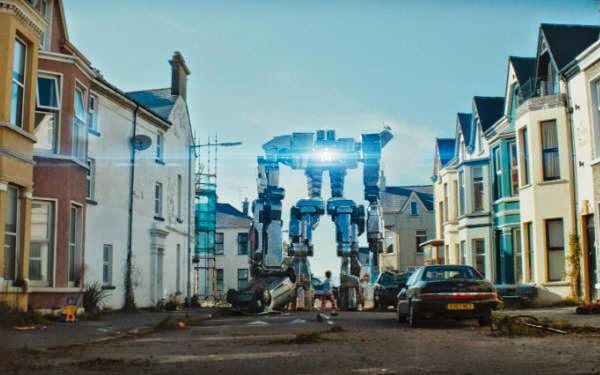 Collaborators – it’s all very WW2 – help their masters keep folk in check and any perceived agitators are taken away and never seen again. As a premise, there is a lot of exciting elements to Robot Overlords, even if they’re all borrowed from superior sources. It’s not the lack of originality that is the problem – because all films borrow from the past and former glories – but the orchestration is an issue. The initial journey and first act smacks of Ian Serraillier’s children’s classic, The Silver Sword (1956). The focus on teens fighting back as is all very Red Dawn (1984), but the level and tone is set more at JJ Abrams’ Super 8 (2011), or even The Goonies (1985). Add to the mix the quintessential Spielberg trope of the absent father. The blend of influences does feel hackneyed, at certain junctures.

What it wants to be is a refreshing British take on Hollywood’s traditional blockbuster domain, but therein lies the rub. Just as Martin Brody famously called for a bigger boat, what director Wright needed was a bigger budget. The special effects and accompanying set-pieces are mightily ambitious and, while sometimes imaginative and visually striking – especially when giant robots are contrasted with ordinary British streets and terraced houses – they can look a little on the rough and ready side. Ben Kingsley and Gillian Anderson are fine in their respective roles (which is a positive, because the younger cast members are a wee bit on the bland side.) The Oscar-winning actor hams it up a treat as an officious bureaucrat. With his little red bow tie, smarmy manner and snobbish comments, he secretly covets Anderson’s worried mum. Elsewhere, Geraldine James pops up as a brassy East End gangster figure, who helps the kids along with their mission to save the day, find the missing dad, reunite the family and end the occupation.