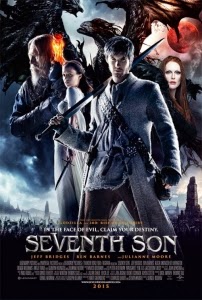 Fantasy epic Seventh Son (2014) had potential to be a somewhat unique film in a genre abundant with echoing plot arcs and medieval-like worlds, but the amalgamation of different cinematic influences director Sergey Bodrov used to illustrate his story is overwhelmingly distracting. Exhaustingly exuberant acting from almost the entire cast, poorly written dialogue, and cheesy comical CGI effects all add to the feeling of seemingly never ending torture the film subjects its audience to. Although the film tries to follow the young adult heartthrob hero Tom Ward (Ben Barnes, perhaps best known for his role as Prince Caspian in The Chronicles of Narnia), it’s hard to pull away from Jeff Bridges fantastic Master Gregory.

Perhaps Seventh Son’s only saving grace, Bridges’ Master Gregory is chalk full of unintentional hilarious quips and excited movements that take him from one side of the screen to the other in the snap of a finger. His downright silly but fun character, however, can’t save the film from its melodramatic self. When Master Gregory loses his first apprentice Mr. Bradley to the conniving, practically omnipotent witch Mother Malkin (Julianne Moore), Gregory recruits Ward to be his new apprentice. There’s a traditional Karate Kid (1984) Daniel/Mr. Miyagi relationship frame set up for the two as they train together to make Ward as powerful as he can possibly be. His true limits are put to the test when he must defeat the powerful Mother Malkin – who’s managed to escape the cage Gregory locked her in- on his own.

Seventh Son should have provided a battle for the ages; young farm boy turned chosen apprentice taking down the big bad wolf on the night she’s about to be consumed with all raging power. A real Luke Skywalker fighting Darth Vader kind of moment. It never manages to get there, though. It’s obvious where Bodrov wants to be, and it’s pitifully painful to watch as you so desperately want to help him achieve his goal, but it falls flat as homage after homage to great action and samurai films plays out. Even though the storyline is faulty, it’s not as bad as the terrible acting handed out by both seasoned veteran actors and newcomers to the industry. It’s overly theatrical, like a stage production of a Shakespeare play, but that type of vivacious, physical acting doesn’t translate well to the screen. It feels distractingly amateurish, even making it difficult to focus on the story at all.

Combining that with juvenile CGI is just the black cherry on top of this rapidly depleting sundae. In a world where Peter Jackson reigns supreme, it’s difficult for fantasy driven films to hold up in comparison, but most manage to make a better attempt than this. It comes off as lazy and unimportant, but when one of the main characters can turn herself into a dragon, a little bit of extra effort on sprucing up the CGI goes a long way. Seventh Son is indescribably disappointing because it could have been a refreshing treat for genre fans. After spending years in development, the final product is laughably abysmal, and perhaps worst of all, utterly forgettable upon viewing.