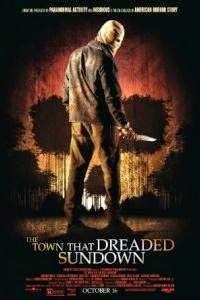 The Town That Dreaded Sundown (2014) is a bizarre remake/sequel hybrid of the 1976 film of the same name. That film, directed by Charles B. Pierce, recounted the real life murders attributed to a serial killer called ‘The Phantom’ who haunted the streets of Texarkana, located on the border of Texas and Arkansas and who was never caught. Alfonso Gomez-Rejon’s debut feature opens with a documentary précis of the situation thus far, setting the scene for the annual Halloween showing of the 1976 version of The Town that Dread Sundown. A de Palma-like tracking shot roams the audience of the drive in, as the local reverend passes out leaflets, the kids neck and nerds dress in costume. 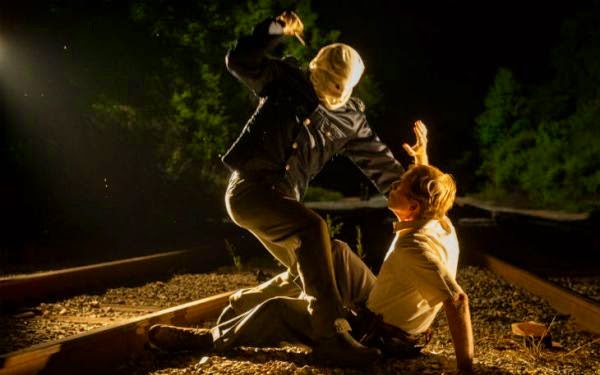 One couple – Jami (Californication‘s Addison Timlin) and Corey (Spencer Treat Clark) – decide they’ve had enough and drive to somewhere secluded and potentially horrifying, where they are dutifully attacked. Jami is allowed to live and told to bear witness to the return of The Phantom and to tell the public about Mary. The town is haunted by the terror once more and as the bodies begin to pile up, the police force prove themselves helpless despite the help of Texas Ranger ‘Lone Wolf’ Morales (Anthony Anderson). Jami takes on a Nancy Drew task – along with old school mate Nick (Travis Tope) – of investigating the old Phantom as a way of understanding the reboot – set up as a clever post-modern horror in the tradition of Scream (1996) or The Cabin in the Woods (2012).

However, The Town That Dreaded Sundown is an incoherent mess, without the wit to commit to any of the numerous sources to which it repeatedly and ostentatiously nods: a snatch of music from Halloween (1978), a setting from Children of the Corn (1984), a plot device from A Nightmare on Elm Street (1984). But everything is fleeting and nothing is settled on. The faux documentary which begins the film is jettisoned and by the end a dreamy voiceover has drifted over this bitty cut up of influences. It’s as if Gomez-Rejon and scriptwriter Roberto Aguirre-Sacasa are so intent on showing off their credentials that they forget to make their own movie. Add to this the film is aggravatingly over-directed with images reflected in eyes, split screen compositions (more de Palma) and so many Dutch angles that the Texarkana residents seem as much in danger of losing their balance as being slashed.

So much obvious thought has gone into making the film visually striking – and to its credit it is – that the script seems to have gone unread. There’s no other explanation for the woeful stupidity of some of the characters’ actions and the blandness of the dialogue. Even the murders, which surely should be a highpoint, feel rushed and ultimately unscary, with CGI blood making altogether the wrong kind of mess. The voiceover attempts to tell us what the story was about – the strange border town status of Texarkana – but the film has no real sense of place, serving up a series of obvious stereotypes. Horror movie veterans such as Veronica Cartwright, Gary Cole, Ed Lauter and Edward Hermann pop up as cameos that – for all the good they do – amount to just more quoting. For all the nostalgia of the filmmakers, their new version misses the grunge, the fun, the scares and the wit of the original.