Traditional narrative tropes of chance and fate are employed to glean some insight into living in Communist era Poland in Krzysztof Kieslowski’s Blind Chance (1987). Imagine Sliding Doors (1998) but rather than setting in motion very different romantic entanglements, the failure to catch a train fundamentally turns on a pin someone’s worldview. This is what happens to Witek (Boguslaw Linda) via three different visions of his life after a desperate run along a station platform. They interrogate the formulation of individual values in the arguably unchanging everyman, as well as exploring various facets of contemporary Polish society and politics with a humanistic but pessimistic bent. 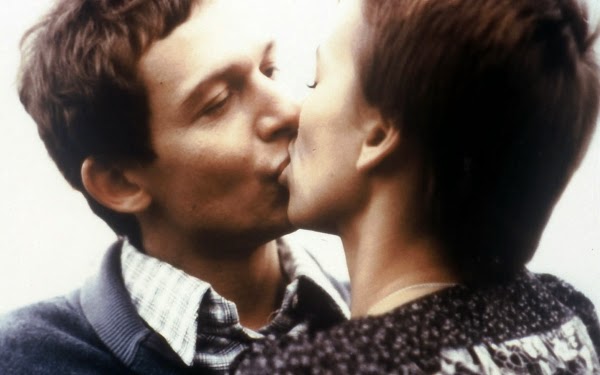 The splintering of Witek’s future occurs as he attempts to board a train to Warsaw via a dash through a crowded station. In the first version of events he manages to catch the train and ends up embarking on a successful career within the Communist Party; in the next he collides with a station guard, is subsequently arrested and then driven into anti-Communist resistance; in the final re-telling he misses the train with minimal drama and continues his former life, remaining staunchly apolitical. Linda positions Witek as a man cast adrift by the passing of his father, highly susceptible to have his fortunes shaped by events. An intelligent but passive young man, he allows Kieslowki to illustrate the diverging – nay, opposing paths – that the same person can easily find themselves on.

Kieslowski claimed when discussing the film that he wanted to turn from presenting the external, to the internal, but the political landscape of the period is inescapable. All three stories highlight different, but no less problematic elements of the ruling regime – from cyclical hypocrisy to more widespread corruption and oppression. But the fairly bleak conclusions of each act pull into sharp relief the underlying fact that nothing has really changed. In the opening moments of each branch, Witek meets a person who sets him on his course. A member of the Communist party and enigmatic mentor; a man intent on resistance he meets during his community service; his prior girlfriend. From there he adopts trenchant belief systems – in Communism, in opposition, in religion, in family. That all three versions are coloured strongly by love, though its mutability is evident in the trio of different women that he falls for.

The montage that opens the film proves the only section to show a particular stylish flourish; the events of his life up to the moment on the platform – including the flight of a Jewish childhood friend, or his birth amid violent unrest – are shown to be of little consequence. A closing sequence in an airport sees characters from previous timelines precisely where they were before, arguably suggesting the irrelevance of Witek’s absence from their lives. Perhaps this was Kieslowski’s point about internalisation. Blind Chance may take in the strident and charged political atmosphere, but Witek makes little impression on it where he picks a side or not. As for him, the final shot suggests that fate isn’t prepared to him a happy ending no matter how many cracks he has at one.