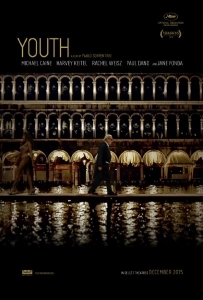 Paolo Sorrentino’s Youth (2015), his latest meditation on aging, memory and mortality, premièred at Cannes in competition today to assorted cheers and boos. This review is going to fall somewhere between the two. Retired composer Fred Ballinger (Michael Caine) is spending his holiday undergoing a variety of health treatments in a spa resort in the Swiss Alps, along with his old friend and film director Mick (Harvey Keitel), his daughter Lena (Rachel Weisz) and Jimmy Tree (Paul Dano), a Hollywood actor preparing for a new role in a German film. In the evening the world’s most elegant pub band plays covers on a revolving stage which is eminently suitable for a striking opening shot. 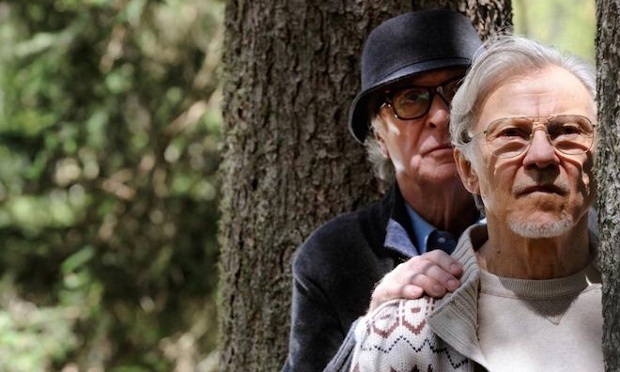 A young prostitute services old men, a married couple never speak and an obese Argentine football hero with a tattoo of Karl Marx on his back (who could it be?) potters about trailed by a blonde who might be his wife or his nurse or more likely both. The plot, such as it is, follows three strands: a proposed concert for the Queen, on which the promise of a knighthood seems to hang and that Fred refuses to consider; Mitch’s preparation of his final film, his ‘testament’ and the breakup of Lena’s marriage to Mitch’s son (Lena is also her father’s assistant, though why a retired composer would need an assistant isn’t clear). Intertwined – or more simply inserted – are tableaux, musical numbers, fire-eaters and soap balloon artists, while Fred even gets an opportunity to conduct a typical Alpine scene.

Following his superb debut Consequences of Love (2004) and political satire Il Divo (2011), Sorrentino proceeded to become an arch-stylist not unlike his giddy younger brother Wes Anderson – capable only of making Sorrentino films. His Oscar-winning The Great Beauty (2013) gave his sumptuous aesthetic a much broader canvas and although Youth is more narrowly focused, it still has little self-restraint. Everything is played out for a momentary effect, like that revolving bandstand or the levitating monk. All the guests and most of the characters are there merely to give the director an opportunity to shoot something evocative. The film is often remarkable, gorgeous even – many of the shots in Youth would make excellent closing shots, including the opening shot – and funny. It’s a work of wonderful moments, but it’s less than momentous and, significantly, you’ll never believe a single word of it. This is a pity as the performances are excellent. Caine commits to his role completely in what is perhaps his best lead performance for a long while. Likewise, Keitel appears to be having fun. The two together make an endearing odd couple, but whereas Death in Venice channelled Mahler, Fred (Fred?) is famed as Prince Philip’s favourite composer. The song we finally hear – a hostage to fortune if ever there was one – is an underwhelming ditty called Simple Songs.

The Hollywood-based satire is self-indulgent at best and implausible piffle at worst. Jimmy complains about his Iron Man-style success, which makes Birdman (2014) look like Sunset Blvd. Mick’s mithering about the movie business seems presumptuous. Tired films about Hollywood mechanics should only be allowed past a certain age. The use of old Mick to get in some digs and let off some of your pet peeves is dishonest. In particular, when Mick’s favourite diva Glenda (Jane Fonda) criticises him and his generation for making progressively worse films, some of those older directors might consider this a straight-out dig at them from the 44-year-old Sorrentino. In an early scene, Weisz injects some much-needed reality into the film with a long, heartfelt complaint against her father’s neglect. For once, Sorrentino stops moving and Youth becomes moving, staying with his actor, focusing on her face and the words she’s saying. Then we continue on through its almost random, relentlessly witty box of tricks. Perhaps Sorrentino needs reminding of William Hazlitt’s excellent advice: “Wit is the salt of conversation, not the food.”