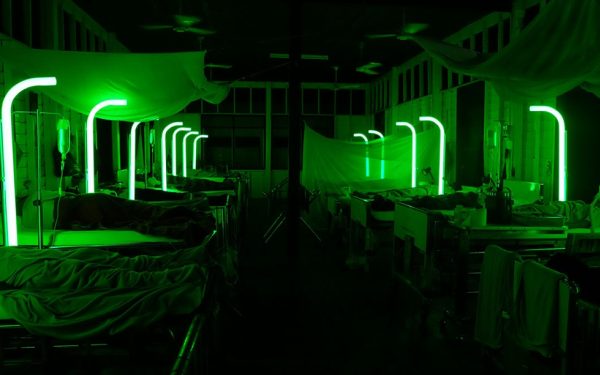 Thai director Apichatpong Weerasethakul came to prominence in 2010 when he won the Palme d’Or for Uncle Boonmee Who Can Recall His Past Lives. Now he’s back with a new film in the Un Certain Regard sidebar: the enigmatic and sleepy Cemetery of Splendour (2015). While working on a building project for the government, a platoon of soldiers fall ill en masse with some kind of sleeping malady. With the hospital full, they are installed in an old school where they’re cared for by volunteers, their families, doctors and nurses. One volunteer, Keng (Jarinpattra Rueangram), is a psychic who can communicate with the soldiers as they sleep and it is she who will reveal what’s caused the syndrome.

Meanwhile, Jenjira (Jenjira Pongpas Widner) a volunteer with a limp and an American husband cares for Itt (Banlip Lomnoi) a patient who temporarily emerges from his narcolepsy to go for lunches with her. Things begin to go weird, as Goddesses turn up and a tale of a ghost King employing the soldiers in his spirit world warfare, and there is a sense throughout the film of a layered existence. Just as the ghosts of the memories of the school haunt the hospital, so palace and kingdoms rule the forests. Jenjira has a salty sense of humour that the film shares. A scene of someone doing a number two in the jungle seems feels like a silly interlude, but it is also a reminder as is a giggled over erection that for all the talks of spirits and dreams the body is still the place we live. Jenjira will later reveal the cause of her limp for the film’s most affecting scene.

Jenjira and Keng become friends and their conversations make up the latter half of the film as the secret history is to some extent revealed. Cemetery of Splendour is classic arthouse fare, which has critics reaching for words such as hypnotic, demanding and languid. Weerasethakul takes his own sweet time letting the tale, such as it is, unravel, but it seems almost a fitting response: as if the films intends to infect the audience with the soldier’s sleeping sickness. Diego Garcia photographs the rural setting, the water wheels that spin, the trees that move as the diggers stand idle, and the interiors with the dreamers lit by fluorescent tubes which change colour with a beguiling beauty as the conscious audience members are drawn into Weerasethakul’s dreamland. The occasional visits to busier areas, a local market where Jenjira and Itt eat, or a multiplex showing a wonderfully schlocky ghost film, are usually interrupted by sleep and the sleepers are returned to the sleepy village.

Whether anything is truly revealed, whether anything truly happens is hardly the point. Asking what it all means is laughably irrelevant and Weerasethakul’s Cemetery of Splendour teeters occasionally on the ephemeral even as its subject is the ephemeral nature of reality. However, Pongpas Widner’s performance keeps the film from nodding off completing and provides some emotional ballast to what at times feels as fluffy and difficult to grasp as dandelion seeds. For the occasional lapse – a pointless park scene where a random crowd swap positions looks like a theatre exercise – there is often a striking image or sly moment of humour to take away and overall, the film rewards persistence.