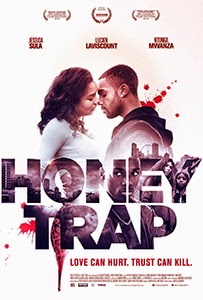 Cinema has recently been gifted with not one but two vital films on contemporary black girlhood. Both probe deep into the confines of class, race and gender construction to tease out the finely-tuned truths of what it means to come of age in today’s urban landscapes. From France comes Céline Sciamma’s Girlhood (2014) and, in reply, England has delivered the quietly stunning Honeytrap (2014). Director Rebecca Johnson’s first foray in the feature-length format is at equal times tender, tense, hopeful and heartbreaking. After being raised by her grandparents in Trinidad, 15-year-old Layla (Jessica Sula) is back in Brixton to live with her distant and often distracted mother, Shiree (Naomi Ryan). After attempts at trying to transform herself from girl to grown-up, Layla catches the eye of local rapper Troy (Lucien Laviscount), who is by all counts charming, controlling and dubiously derelict. But to Layla, Troy is a knight in shining armour. She is deeply smitten until she finds out that she is not the only lady in his life, leading to a emotional downward spiral that ends with her seeking comfort in the company of Shaun (Ntonga Mwanza). This does not sit well with Troy, who ensnares Layla into a fatal plot to ensure she never associates with Shaun again. Johnson’s script may seem superficially rote when it comes to weaving this coming of age yarn: hints of childhood trauma, absent parents, harrowing experiences set in a poor Brixton neighbourhood.

But there are a number of factors that work to make this film much more relevant and relatable. Sula’s performance as Layla is layered with fragility and the will to thrive in a new environment. She is never not emoting to her fullest on screen, her face radiating so many desires in one shot. Also, the setting and the racial politics do nearly fall into trope mode at points, but Johnson manages to stave this off by keeping her narrative strictly out of melodrama and firmly in social realism. Layla’s evolution of self comes at the expense of shoplifting (a favourite pastime of the local girl group) and relegation of sexual power (at the persuasion of Troy) but she learns very quickly the consequences of trusting easily. The environment changes her, her adaptation becomes her shield. As the title suggests, this film is a beautifully loaded gun, a tension always simmering beneath the surface, ready to be unleashed. On that surface it’s a glorious film to look at. Some of the loveliest moments show Layla gazing into a mirror, reflecting on the woman she could become, as well as trying on her mother’s clothes, as if willing herself out of her childhood cocoon. Honeytrap is a finely crafted picture that may be one of the most recently vital films extolling the virtues and dangers of modern British black girlhood.