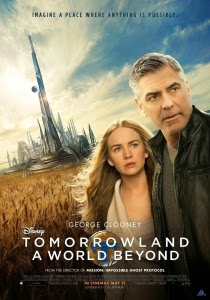 For his second foray into live action filmmaking after 2011’s unexpectedly impressive Mission: Impossible – Ghost Protocol, Pixar veteran Brad Bird teams up with prolific screenwriter-producer Damon Lindelof for the audacious original adventure Tomorrowland: A World Beyond (2015). A project literally fuelled by imagination, which has thus far maintained a rare cloak of secrecy regarding its narrative particulars, this is a typically family-friendly jaunt from Disney that is as authentically sanguine as it is relentlessly entertaining, free from the constraints of the type of franchise loyalty that arrests the studio’s other properties elsewhere. 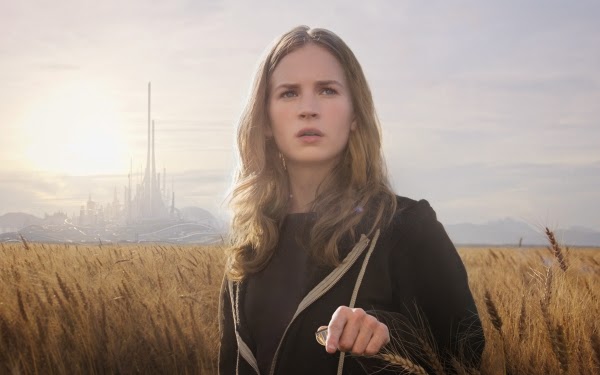 In a role that plays to his affable and charming nature – though given a curmudgeonly twist, George Clooney plays Frank Walker, a jaded former boy genius who is uneasily cajoled by bright, scientifically aware teenager Casey Newton (the excellent Britt Robertson) to make a return to the enigmatic world known only as ‘Tomorrowland’. Going by the wide-eyed dictum that “Imagination is more important than knowledge”, this futuristic metropolis located somewhere in time and space is a breeding ground for the optimistic, bereft of political distraction and physical limitations. Initially conceived as a utopic refuge for a dying Earth, Tomorrowland undergoes a strategy overhaul at the hands of its quietly menacing overlord (Hugh Laurie), which causes Frank and Casey to embark on a precarious, world-changing mission.

An amalgamation of Disney’s heritage, current status and future enterprises that starts in the evocatively rendered 1964 World’s Fair, Tomorrowland is a refreshing and well-intentioned standalone piece that revels in a creatively manufactured appropriation of the conglomerate’s existence. Directed by Bird with the type of dexterous awareness of and appreciation for bracing action and affecting emotional context, the film is a paean to ingenuity that oozes with the type of visual flair that have made his animations stand out from an increasingly generic crowd. From the altered Disney logo that welcomes you in, Bird imbues his passion project with deft flourishes that warrant repeat viewings, as does the film’s pro-humanitarian messages. Known for thriving at the beginning of projects before squandering whatever potential they initially had, Lindelof benefits from the collaboration with Bird here, with the duo only rarely letting their original conceit become misplaced by plot contortions. Having said that, the action does take an inevitable dip towards the final act, where, after spending a large chunk of the film focusing on the journey, the dramatic intricacies are curtailed somewhat to pave the way for a rather hokey dénouement.

There is also, oddly, not enough time spent in the vast expanse of the film’s title setting, which renders Laurie’s Tomorrowland-bound, embittered antagonist somewhat ineffective as there isn’t enough room for him to make enough of an impression. This isn’t the fault of Laurie, a comedy actor who, perhaps miscast, is drowned out by the genre trappings that surround him. Nevertheless, Clooney and Robertson make for a well paired set of engaging protagonists, though young actress Raffey Cassidy very nearly steals the film right from under them as a character intrinsically linked to Frank’s past, and heart. It’s this emphasis on human interaction that really marks Tomorrowland out as a tentpole movie to take note of, one that retains its company’s core messages whilst it continues to dominate the cinematic landscape. Wholesome in nature and forward thinking in its design, the film is a none-too-subtle call to arms that, while it reminds us that it’s a small world after all, it’s far from a diminishing one.