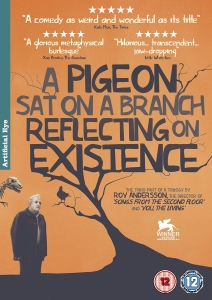 The dead-eyed cast of Roy Andersson’s A Pigeon Sat on a Branch Reflecting on Existence (2014) would appear just as home on the streets of London as Gothenburg, or any other city experiencing the dreary decline of late capitalism. Still, their masterful comic timing and pacing make hilariously black viewing pleasure, with a dash of the Brechtian absurd. Don’t be fooled by the drained blue-and – beige palette of Andersson’s set design either. There is never a dull frame in his obliquely shot scenes of exquisitely composed, static long takes. Incorporating historical anachronism, musical revelry, and unsettling cruelty, 37 vignettes make up the the final part of his trilogy on humanity. 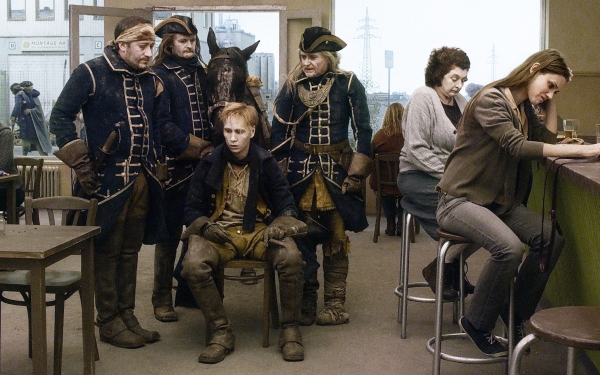 Turns out the proper study of man is indeed man; but from the distant perch of a discerningly observant, if not sympathetic pigeon. It’s fitting that the film’s opening reveals an elder gentleman perfunctorily observing the stuffed specimens on display in a natural history museum. What follows is everything from a sorrowful cleaning lady to a suicidal CEO. The embodiment of those unable to articulate their despair may be a scene entitled ‘Homo Sapiens’, where we witness an immobilised lab monkey shrieking in pain as it is sporadically electrocuted, while an oblivious scientist on her cell phone stares out the window, intoning inane platitudes like “I’m glad you’re doing fine.”

Likewise, society’s failed recourse to escapism is embodied by a glum pair of travelling salesman (“We want to help people have fun”), peddling the same tired spiel and partywear from door to door. If unable to laugh at themselves, they can always drink and reminisce of merrier times in the beer hall, as exemplified by a regular’s delightful memory of 1943, which involves a sing-a-long led by Limping Lotte, who demands the payment of a kiss for every shot. But A Pigeon… adroitly sidesteps nostalgia by also illustrating the past as a place of injustice and horror. The brash spectacle and marching song of Charles XII’s army “a hundred thousand strong” rings out in hollow irony when later, the same mutilated soldiers limp back in defeat, accompanied by widows’ cries.

In one terrifying dream sequence, British soldiers whip enchained Africans into a cylindrical metal instrument, which issues beautiful music when the natives are roasted alive inside; an atrocious reminder of European colonialism. Despite its doom and gloom, A Pigeon…. surprisingly turns out to be Andersson’s most humanist and life-affirming film. Poetic depths flash beneath the familiar surfaces of the mundane, as girls gleefully blow bubbles from a balcony, an amorous young couple fondle on the beach, and a mother on a park bench kisses her newborn in rapture. After all, there is something to be said for the persistence, if not private courage, of individuals who claim they “can’t go on”.