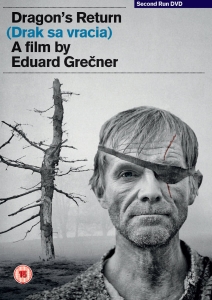 “Heaven forbid if he ever comes back,” intones a village elder as Martin Lepiš, otherwise known as ‘Dragon’ (Radovan Lukavský), is led, restrained, into exile. This sequence is told in flashback to give context to the thick atmosphere of Eduard Grečner’s Dragon’s Return (1968). A brooding and mythic drama, it tells a simple folktale of a hamlet in the Tatra Mountains and uses modernist techniques to explore themes of community, exclusion and lost love. It’s most notable innovation is the use of a particular telephoto lens that flattens and blurs the landscapes of Vincent Rosinec’s arresting cinematography, placing emphasis on the characters set against an almost elemental backdrop. 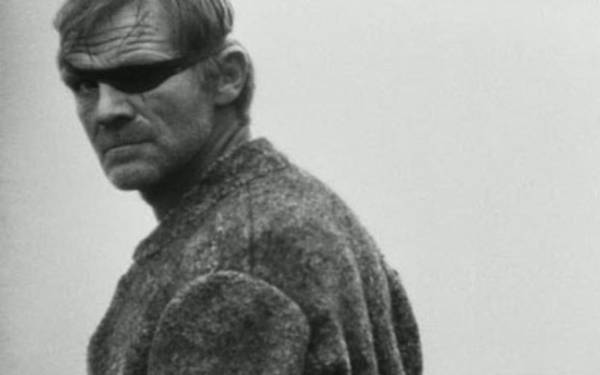 This is most apparent in the case of Dragon, who may not have been an inspiration for Mads Mikkelsen’s One-Eye in Nicholas Winding Refn’s Valhalla Rising (2008), but will certainly bring him to mind for modern audiences. Not quite the allegorical force of nature that One-Eye represents – though laden with a great deal of his own religious symbolism – Dragon arrives in the narrative sporting a scar and eye-patch amid superstitious whisperings of doom. A reclusive potter he was driven from his home years before and remains a bad omen to his former neighbours. When the evocative soundtrack isn’t dominated by a chorus of chanting voices representing the community.

The village’s cattle have been stranded in the mountains miles away by a raging wildfire and Dragon, in the hope of winning back their favour, offers to recover them. While blame is placed upon their own local albatross, Dragon, for a drought that strikes the land, fire plays its role both narratively and symbolically – proving the source of death and destruction and well as creation in the furnaces of the aptly-monickered potter. Discordant strings and horns heighten the tension of an atmosphere already pregnant with the threat of violence while memory springs forth at vital moments to fill in the backstory. The iridescent Eva (Emília Vásáryová) was Dragon’s lover before he was cast out, and after waiting for him she ultimately married Simon (Gustáv Valach) whose hand clenches on his axe when Dragon arrives back in the area. Though he is an extreme case, he represents the hard truth that the village will never be willing to welcome Dragon back with open arms, governed by their long-held beliefs. As he wanders the magnificent foothills, he is the epitome of creativity stifled by tradition, and of modernism employed to explore the arcane. The Czech New Wave may cast a long shadow over the concurrent Slovak one, but Dragon’s Return is certainly one reason to light a torch and take a look.