DVD Review: ‘Eyes Without a Face’ 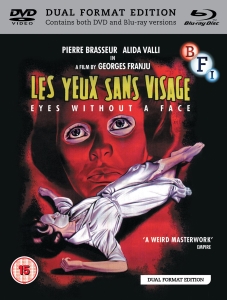 If you only know Eyes Without a Face (1960) from the Billy Idol rock ballad, then you are in for a treat. Georges Franju’s Gallic body horror is a complex atmospheric chiller which balances graphic shocks with subtle characterisation. A woman Louise (Alida Valli) drives through the French countryside at night. In the backseat, a passenger sways unconscious. Parking by a river, the woman drags the passenger down the muddy bank and drops her in the water. The celebrated Dr. Génessier (Pierre Brasseur) is called to the morgue to identify a body which might be his missing daughter. He does so and a funeral follows but all is not as it seems as his assistant Louise stands by his side. 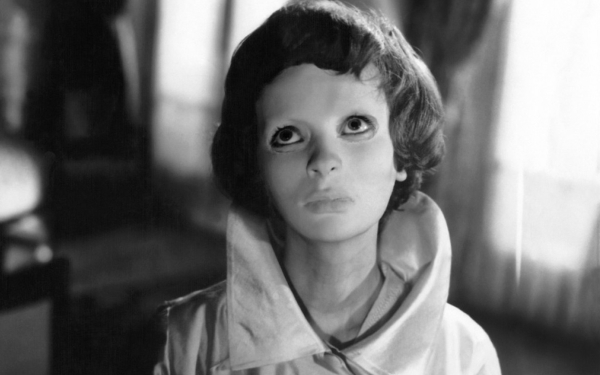 In the large villa that shares the grounds of his clinic, the doctor keeps his daughter Christiane (the now iconic Edith Scob) secluded. Her face has been so terrible damaged by a car crash that she has to wear a mask and no mirrors are allowed in her room. It soon becomes apparent that Génessier and Louise are kidnapping young women and surgically removing their faces to use as grafts in an attempt to repair Christiane and have her return to normality. Following the Second World War British horror movies were an easy way of fulfilling the low budget quickies and gained popularity in France. For French directors, horror seemed a less amenable genre.

When producer Jules Borkon bought the rights to Jean Redon’s novel, he was hoping to compete with the popularity of the British-made Dracula and Frankenstein adaptations. Documentary filmmaker Georges Franju was called in to direct the film as his second fiction feature, but Franju is careful not to make a full-blown horror movie – in fact he called it “horror in homoeopathic doses” – preferring to build the atmosphere slowly and subvert many of the clichés. As with the opening scene, people drive to-and-fro a lot, they walk through rooms of the villa, and yet the movement is indicative of entrapment, pacing rather than going anywhere. The script by Pierre Boileau and Thomas Narcejac – who together wrote the original story on which Alfred Hitchcock’s Vertigo (1958) is based – do away with the generic simplicities of the mad scientist and give every character a complexity that resonates. Dr. Génessier is arrogant and puffed up, but as well as a murderer he is also a loving guilt-stricken father (he was driving when his daughter had her accident, we learn) and a devoted physician. We see him in his clinic realising that a young child has a hopeless condition and his compassion is obvious.

Franju shoots a wintry Paris in which young women can disappear in the fog and the police sit in crumbling offices, placidly clueless. The crimes, in contrast, take place in well-lit locations. The disposal of the body at the beginning of Eyes Without a Face and a midnight grave-digging scene seem to happen under floodlights. In the latter, Louise looks up to see a passenger jet passing far overhead as the world goes on, blissfully ignorant of their activities. Nothing is more brightly-lit than the infamous heterograft operation which is still difficult to watch. The meticulous professional movements of Dr. Génessier and Louise making it all the more horrible. And yet our sympathies shift as in a series of still photographs we see the grafts fail. The good doctor is trying to cure a patient, but with his scientific detachment he fails to notice the eyes of his daughter watching everything and the baying of the dogs imprisoned in the cellar getting louder.