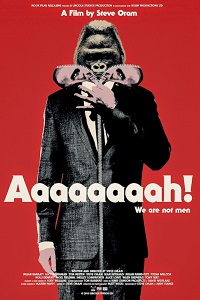 Steve Oram’s directorial debut Aaaaaaaah! (2015) comes on like a collaboration between Dogme ’95 and Chris Morris. It’s hard to think of another film closely like it in British cinema. It really is that out-there and singular. You can bet your bottom dollar on Aaaaaaaah! becoming a cult oddity in years to come, but it’s equally fair to say that the general cinema-going audience would be left nonplussed. It’s an experimental work for the arthouse crowd, certainly, but it’s also one of the funniest and most poignant movies of the year. The lives of gorillas and other primates, their hierarchies, interactions and rituals, serve as chief inspirations for Oram’s anthropological social satire/horror-comedy. 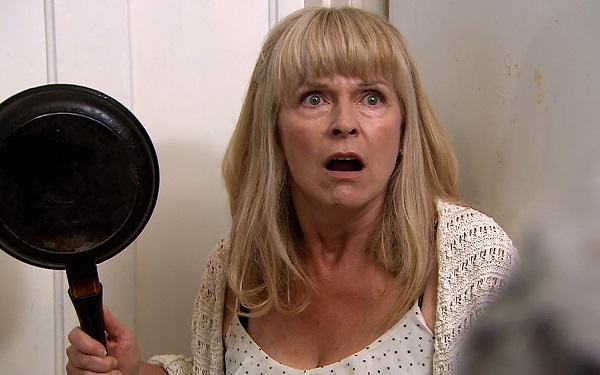 The idea that the world exists for our use, because we give it its frame of reference, separates us from our animal past and cousins. However, behavioural tics and customs ensure we haven’t completely rid ourselves of animalistic traits and instincts. Oram’s aesthetically grungy, no-thrills shooting style is contrasted by a scenario brimming with invention and crackling with resonance. It also manages the neat trick of being archetypal, classical, mythic, satirical and transgressive without ever feeling disjointed or over-reaching. Set in an alternate reality, one with a slight dystopian feel, human speech hasn’t evolved beyond caveman-like grunting. An alpha-male (Steve Oram) and his minion (Tom Meetan) move into a new patch of south London and proceed to dominate the area through displays of menace and strength. Slowly, however, the plot turns into a karmic tragedy about the illusory nature of power and good old-fashioned revenge.

The cast is uniformly excellent in roles that force them to convey emotions and ‘dialogue’ solely using grunts, sighs, whistles and snarls. What might have come off as a cringeworthy training session from the RADA playbook is, thankfully, anything but – it’s inspired. Julian Barrett, as a bruised and belittled patriarch, is the stand-out performance. As he sleeps rough under a hedge at the bottom of the garden, occasionally interacting with his daughter (played by Lucy Honigman), ‘Jupiter’, as the character is named in the end credits, is a usurped king merely biding his time before taking back the throne. The character’s saturnine melancholy and sadsack tramp meekness are brilliantly portrayed by Barratt, and his scenes with the daughter, who feeds him slices of Battenberg cake when nobody is looking, are endearing and sweet. That’s why, then, the ending is completely shocking. What makes Aaaaaaaah! so clever and so compelling is, to borrow a line David Attenborough might have said gazing into the eyes of a silverback mountain gorilla, but is actually uttered by Barbara (Patricia Tallman) in the 1990 remake of The Night of the Living Dead: “We’re them and they’re us.”