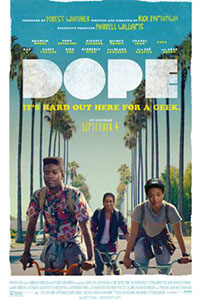 Produced by Forest Whitaker, this teenage coming-of-age caper set in Inglewood, California involves the usual hood narrative trifecta of drugs, gangs, and crime while attempting to offer a playful alternative to black cultural stereotypes. Fantastical, and sometimes fun, if not quite convincing, Dope (2015) offers plenty of eye candy thanks to Rick Famuyiwa’s energetic direction, Rachel Morrison’s colourful widescreen lensing, and a cast including prominent models, rappers, and TV personalities. Supported by a single working mother (Kimberly Elise), high school nerd Malcolm’s (Shameik Moore) American Dream is not to play basketball but to get into Harvard. 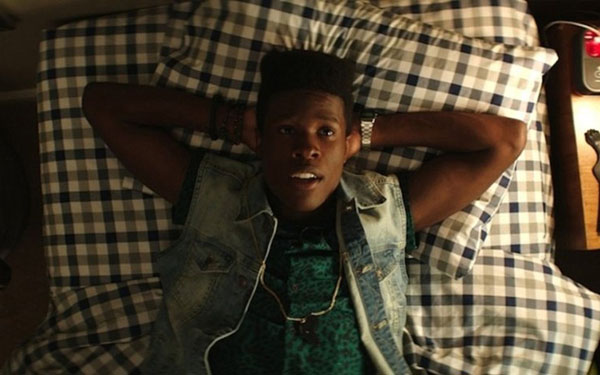 When Malcolm and his geeky best friends Jib (Tony Revolori) and Diggy (Kiersey Clemons) aren’t dodging bullying jocks and gangbangers in school and on the streets, they pursue interests in “white stuff” like good grades and classic 90s hip-hop. Sporting a flat top and vintage Air Jordans, Malcolm is equally at the mercy of his raging hormones and the principle’s flat refusal to accept his thesis on Ice Cube’s It Was a Good Day. Just in case the bouncy dialogue, knowing gags and exhaustive pop culture borrowings are too feel-good in flavour, Malcolm also reminds the viewer how easily he and his friends can be killed for just being “at the wrong place at the wrong time.” After Malcolm does a reluctant favour for drug dealer Dom (none other than A$AP Rocky), he is also persuaded to broker a date at Dom’s birthday party with corn-rowed beauty Nakia (Zoe Kravitz), who conveniently happens to need help with her maths homework.

Somehow, Malcolm and his crew manage to end up with a backpack full of $100,000 worth of ecstasy when the party gets a little too wild. With Dom temporarily behind bars and armed thugs in pursuit, Malcolm is determined to do the right thing and get rid of the stash before his Ivy League plans are jeopardised. But an attempt to hand over the drugs to one of Dom’s colleagues results in a comic highlight midway through the film, embroiling the nerdlings in possible virginity loss, thanks to oft-naked, drug dealer’s daughter Lily (Chanel Iman), a rock jam in a rich kid’s (Quincy Brown) home studio, and a fast-food-joint shootout – resulting in Malcolm neatly making it just in time to his Harvard interview. Although Dope ultimately has its heart in the right place, it sends mixed messages when the geeks go ganster with the hacker help of prep school dealer Will (Blake Anderson) and decide to sell their stash online via Bit Coin. By the time their scheme goes viral – along with the protagonists’ punk band, Oreo – the film oddly feels closer to Orange County than Friday or Boyz in the Hood. Diluted by too many coincidences and a heavy-handed voice-over from Malcolm, that tells rather than shows its forced happy ending, Dope proves that not all Sundance audience hits are necessarily true gold.