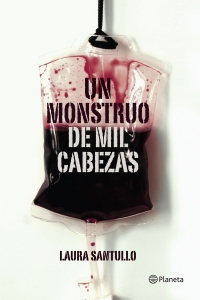 Opening the Orizzonti (Horizons) sidebar at the 72nd Venice Film Festival today, A Monster with a Thousand Heads (2015) is a witty and efficient drama from Rodrigo Plá about a woman pushed to the edge by bureaucracy and an indifferent society. Jan Raluy plays the woman in question, Sonia Bonet. Her husband has cancer but the insurance company refuses to provide the medicine that he needs to ease his pain and perhaps reduce the tumour. Having been unable to reach the doctor in charge on the telephone, she goes to the offices of the company with her teenage son Dario (Sebastián Aguirre Boëda) in tow. However, no one is interested in her case. 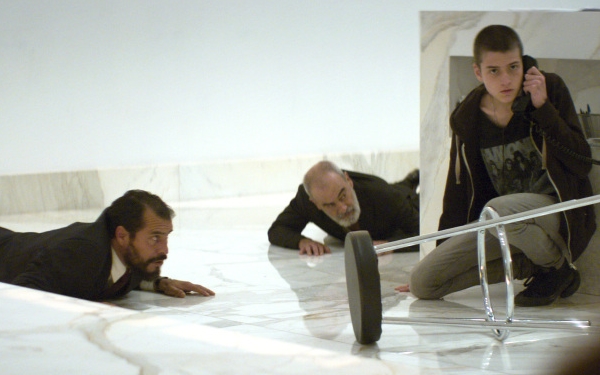 The receptionist is obstructive; the doctor (Hugo Albores) doesn’t want to know and as a voiceover of a trial plays over the action, we understand that something dire has occurred, or is going to. On following the doctor to his home, Sonia pulls a gun on him and his wife. Determined to see her husband’s case reviewed, she resolutely takes the case up the chain to the higher echelons of the company all the way to the CEO, Dr. Sandoval (Emilio Echeverría). Searching for a way to placate the desperate woman with the gun, Sandoval reveals documents that show his company have purposefully denied care as a way of making money, incentivising doctors to reject claims and ignoring rules.

Fully aware that she is going to jail for her actions, Sonia persists in having the documents printed and a deal between her and the company signed which will see the medicine released to her husband in return for her not publishing the evidence of malfeasance. A Monster with a Thousand Heads sets itself up as a conventional thriller, in its plot of the worm violently turning reminiscent of Falling Down (1993) or better still John Q (2002). But Plá is a meticulous and original director who is careful to tweak what is at times a slight story – adapted by Laura Santullo from her own novel – into something more intriguing. Time is out of joint and ellipses are strategically placed to heighten the tension. Apparently irrelevant characters are followed until they join our characters from a different angle – two teenage girls in a lift check their make up in the mirror and chat blithely unaware of the drama they will come across when the lift doors open.

Everyone is a potential witness and we are all participants (the thousand heads of the monster) to a society that treats the vulnerable unjustly, but it won’t be that society which is on trial. Odei Zabaleta’s camera frames Sonia in the margins of the screen, someone who needs to be holding a gun before she is noticed, or taken seriously. Raluy avoids the dangers of hysteria, playing her as a pragmatic fury who never loses her humanity. The squealing tires of a car descending the ramp of multi-story car park could easily be the sound of Sonia’s pent up inner voice. There are a couple of moments of such implausibility that the whole film is at risk of becoming a parody, a lost sketch from Damián Szifrón’s Wild Tales (2014). The film is not as complete as his debut La Zona (2007) but Plá’s film is a caustic, genuine swipe at a selfish and insincere society which is content to make money from the suffering of ordinary people.