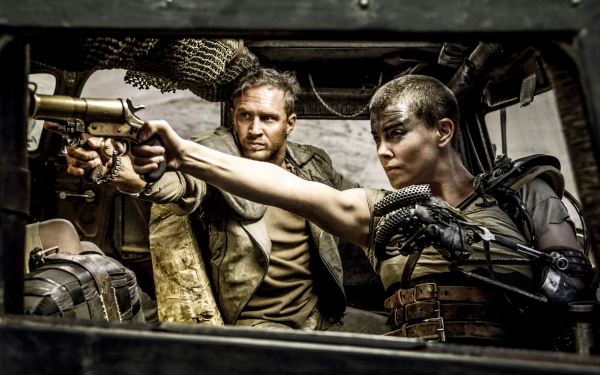 Chaos reigns in George Miller’s Mad Max: Fury Road (2015), his long-awaited return to the world of his post-apocalyptic Ozplotiation franchise after a thirty-year absence. The budget and the actors may have changed, but this is clearly the evolution of the filmmaker’s crazed vision, arguably reaching the petrol-soaked Valhalla that he’s been striving for since the modest thrills of 1979’s Mad Max. It’s an injection of equal parts adrenaline and gasoline that tosses narrative out of the window and turns the action up to eleven.

A flame-spewing guitarist is at the tip of a juggernaut at the vanguard of a fleet of spiked, hellish vehicles that make up the rolling army of Immortan Joe (Hugh Keays-Byrne, the original film’s Toecutter). He’s the aptly grotesque warlord who breathes through a skull face-mask and keeps imprisoned a coterie of nubile breeding wives in the hope of a healthy heir. His general Imperator Furiosa (the hugely impressive Charlize Theron) has turned cloak, however, commandeering one of his War Rigs and liberating his wives.

Immortan Joe and his War Boys (including Nicholas Hoult’s Nux) give chase across the baking Namib Desert – replacing the arid expanse of the Aussie Outback – after the runaways who have fellow ex-prisoner Max (Tom Hardy) riding shotgun. Far from being the set-up, that is effectively the entire plot. For Fury Road is that rare thing, an incredibly lean and gloriously overblown actioner. The acrobatics lie not in storytelling or in theme, but in the lurching crunch and twisted steel of high-octane vehicular mayhem. And the flames, oh the flames. Every pursuing wagon or War Boy decked in tribal paint and cultish zeal that Furiosa and Max manage to stave off is sent flipping and burning into the sand in spectacular fashion. Nothing is too much, and whilst there is the danger that some will find the unremitting havoc tiresome, Miller’s endless innovation keeps things fresh despite the surrounding wasteland.

Max’s position as bystander, foregrounding Theron’s kick-ass heroine, also feels like a cool breeze in the stifling landscape. It may not a unanimous home run – there are still lingering shots of Joe’s scantily-clad harem for eye candy – but it’s certainly hurtling in the right direction. With close-cropped hair and painted with oil, Theron is the beating heart of the film and Furiosa’s character provides the picture with its less literal momentum. Hardy plays Max with typical tough-guy impassivity, grunting his way through the vast majority of the proceedings. There are no witty one-liners – in fact, one could almost compare it to a silent film were it not so deafeningly loud. But that is ultimately what Fury Road is all about. Sound and fury at 100 mph, and it’s one hell of a ride.