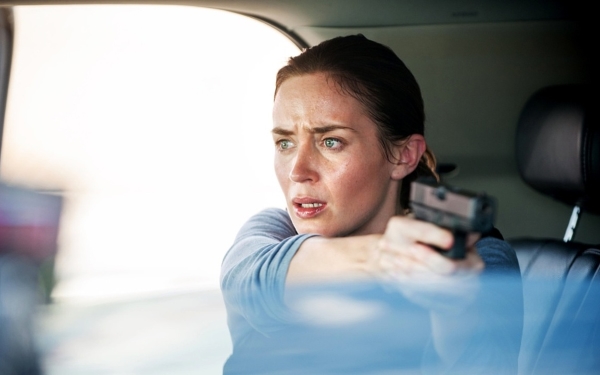 Denis Villeneuve, the Canadian director behind Prisoners (2013) and Enemy (2014), returns with Sicario (2015), a bleak, powerful and beautifully realised trip to hell. It’s a significant film – a French Connection (1971) for the drug-fuelled Mexico-US border war – full of pessimism, moral ambiguity and tension. With a ponytail and dressed-down intensity, Emily Blunt plays Kate Macy, an FBI officer fighting a losing battle against the encroachment of the Mexican cartels in Arizona.

We first meet Kate as she and partner Reggie (Daniel Kaluuya), along with a platoon of officers, raid a safe-house only to find a host of mutilated corpses hung up in the dry walling. The escalation of violence and the failure of traditional law enforcement to impact on the gangs has led to the drafting in of Matt (Josh Brolin), a shady consultant in flip flops, whose ready wit and laid-back manner belie his cynical and extreme methods. Matt recruits Kate for his team of Delta soldiers and fellow ‘consultants’, but pointedly not Reggie, because Reggie has a law degree and they don’t want lawyers where they’re going. Accompanied by the similarly mysterious Alejandro (a brilliant Benicio Del Toro), the team head into the Mexican border town of Juárez to collect the brother of a local king pin.

The motorcade travels through Juárez accompanied by a convoy of equally tooled up, loyally suspect Federales. The tension is cranked up when on the return journey – asset secured – there is gridlock at the border crossing. In a brilliant reversal, it isn’t a car chase that will have you on the edge of your seats but a traffic jam. On the surface, Kate is the innocent abroad – committed to her work and mission, she has no ties, an empty apartment and a divorce to show for it. Willing to sacrifice certain legal niceties in order to make a difference, Kate is aware of the catastrophic escalation occurring around her, but is also utterly unprepared for the level of violence and the amoral if not murderously immoral murk she finds herself in. Her actual role is as unclear to us as it is to her until fairly late in the film. Although set up as a kick ass woman surrounded by men – a Clarice Starling role – heroism of either gender is not relevant here. In an apparently unrelated subplot, Silvio (Maximiliano Hernández), a corrupt policeman who works also as a courier for the cartel, is shown as an ordinary working stiff, struggling to get up in the morning and find time to play football with his adoring son. The consequences of the drug violence on ordinary Mexicans is made clear following the initial raid. Kate and a fellow officer go the roof of the compound and watch as what appears to be war breaks out in the Mexican town they just left, with tracers bullets and explosions lighting up the night sky.

Each set piece is orchestrated with aplomb – a raid on a tunnel under the border being a particular stand out – but Sicario is kept grounded in reality. Villeneuve keeps his focus tight on his small group of characters and though the plot is complex, it fits the Byzantine intricacies of the problem and the obscure motivations of the operators. Brolin is utterly convincing as the gregarious but cynical Matt, a less quiet descendant of Graham Greene’s Quiet American. The film sets him up in a traditional tough mentor role, but her real lessons are given by Del Toro’s Sicario. A man with a dark history which is never fully resolved, he warns Kate that nothing will make sense “to your American ears” and he will be the one who gives Kate her real schooling, but it will be a lesson which will be hard indeed to stomach. The escalating violence in on the Mexican-US Border have had a spate of dramatic treatments of late from Ridley Scott’s The Counsellor and Oliver Stone’s Savages to Breaking Bad. Sicario ranks highly, helped to an epic apocalyptic beauty by Roger Deakins’ sublime cinematography with his rolling twilit cloudscapes and bleached out cityscapes. Villeneuve has the courage to accept that there is not going to be any happy resolution that won’t be a dishonest fiction and he holds to that pessimistic outlook.