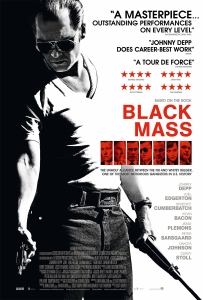 Scott Cooper’s real-life crime drama Black Mass (2015) is constantly trying to escape the looming shadow of past gangster cinema triumphs. It all too readily falls into the comfortable tropes of the genre whilst failing to provide a comprehensive and engaging biopic of one of Boston’s most notorious mob bosses. When it bowed at Venice earlier in the year much was made of Johnny Depp’s performance as Boston crime lord James “Whitey” Bulger, with his slicked-back, thinning hair and piercing blue contact lenses.

Depp’s turn is undoubtedly impressive, crafting a deeply creepy performance as an unhinged criminal and one-time resident of Alcatraz, but it’s not enough to carry the thin script provided by Mark Mallouk and Jez Butterworth. Black Mass opens soon after Bulger’s release from prison, where we see him running a small racket in South Boston. He’s ambitious and desperate to oust the Italian mafia. When an old school pal and FBI agent John Connolly (Joel Edgerton) offers him a deal to inform on the Italian mob in exchange for the Bureau turning a blind eye to his operations, Bulger jumps at the chance. 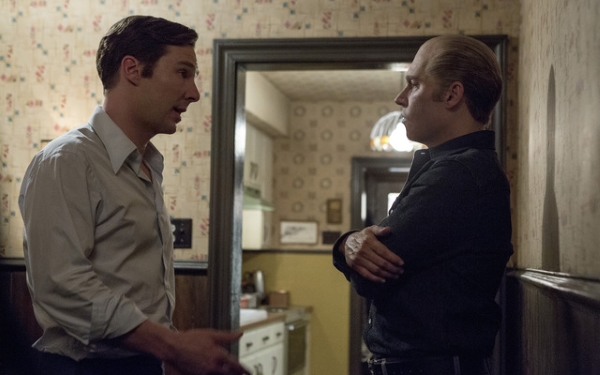 The initial problem (one that was also present in this year’s Kray biopic Legend, starring Tom Hardy) is that too much screen-time is spent showing the caricatured and individual acts of Bulger and not enough divulging how he rose to power or even wrestling with his complexity. Instead, we focus on Connolly’s adoration of Bulger. We get the feeling that he’s still trying to impress one of the big boys from the school yard. There’s little sense of the conflict within Edgerton’s Connolly, who happily conspires with Bulger.

The reasoning behind this approach: in Boston, loyalty is everything, especially if you have Irish ancestry. One major flaw is the treatment of the female cast – Julianne Nicholson, Dakota Johnson and Juno Temple – who are given little more to do that quake in the presence of Bulger. Not once are we offered a rounded female character, which is incredibly wasteful given the cast. Bulger was not only helped by the FBI but also by the positioning of his little brother, Billy (Benedict Cumberbatch). Cumberbatch succeeds at playing the good boy who managed to escape the block and become a prim and proper senator. The sibling dynamic is thin and never fully explored, no doubt in part due to the complexities of the real-life Bulger. Cooper and his team have failed to wrestle fully with the concept of moral corruption which, in the right hands, could have made this movie so much more. Instead, Black Mass revolves entirely around Depp’s performance.

The theme of loyalty is ripely explored, showing Bulger to be a hypocrite, often attacking or murdering people if he sniffed any trace of betrayal while he merrily ratted to the FBI. This isn’t quite a “return to form” for Depp, although it’s refreshing not to see him swigging rum and quipping one-liners and it does remind us of his superb performance in Mike Newell’s Donnie Brasco (1997). Black Mass is far from a criminal failure but it never truly gets under the skin of Bulger. Cooper prefers to show us a series of grisly murders, holding focus and consequently leaving us hanging as to just how a man who became one of the most wanted men in American history was able to run riot in Boston with the complicity of the FBI. We remain ignorant of Bulger’s complexity, which is incredibly frustrating.