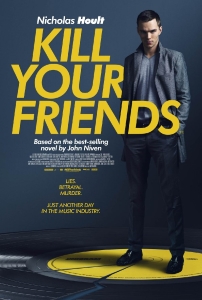 Martin Scorsese’s The Wolf of Wall Street (2013) came under heavy fire from some quarters for not being strident enough in its disavowal of the behaviour of Leonardo DiCaprio’s Jordan Belfort. There’s a very fine line between portraying outrageous behaviour and skewed morality in the hopes of highlighting its grotesquerie, and relenting to its warped philosophy. Kill Your Friends (2015) – the feature debut from Owen Harris, based on the novel by John Niven – falls into the latter camp. 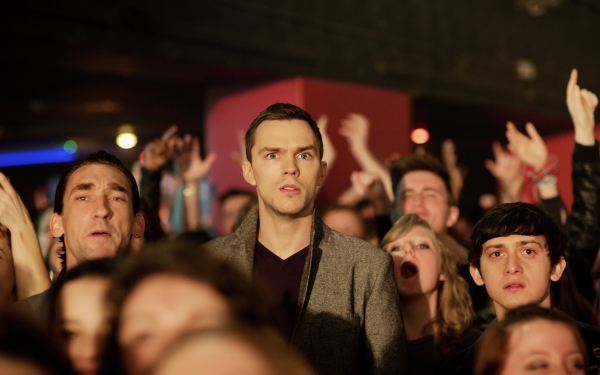 Rather than condemning – or even escaping – the smug self-satisfaction of its odious protagonist Steven (a suitably loathsome Nicholas Hoult), it revels in his attitudes and prejudices. Delivered by Hoult, the narration is laden with puerile and inappropriate commentary that continually makes snarky light of uncomfortable issues from rape and paedophilia to the AIDS crisis and the Holocaust. The problem extends to the representation of other characters in the narrative, with the only women worthy of its attention being the “doable” ones, and the less they’re clad in the better. With the story aiming to be a cross of Irvine Welsh and American Psycho, many will consider all of this to be Steven’s point of view, but the film only seems to support his position. He’s an A&R man at a London music label in the 90s with designs on promotion.

Steven struts around the office to Blur’s Beetlebum, plotting against his co-workers and breaking the fourth wall while authoritatively explaining the finer points of his rationale. The meaning of life, according to these coked-up, Conan-quoting apes, is “to drive your enemies before you and hear the lamentations of their women.” That’s assuming that those women are in a size 10 minidress or, even better, their underwear. Otherwise they, and the film, would try to ignore their existence entirely. The single female character that approaches depth is Steven’s receptionist Rebecca (Georgia King), but that ‘depth’ manifests as duplicitous ambition and she’s duly brought low as the punchline of a sickening and violent gag. There are some positives amongst the onslaught, however.

Hoult is impeccable as the despicable Steven, his swagger and spite exactly what the role requires. The direction is slick from first-timer Harris and the soundtrack provides some welcome respite as well; Echo and the Bunnymen, Oasis, and The Chemical Brothers all feature. Sadly, even that pleasure has become a chore by the time Thom Yorke arrives to report Steven to the Karma Police. Of course, the repercussions never materialise for him, but audiences may not escape so lightly. Kill Your Friends is a rancid cocktail of misogyny, homophobia, and much more besides, that never convinces as scathing satire as much as back-slapping celebration.