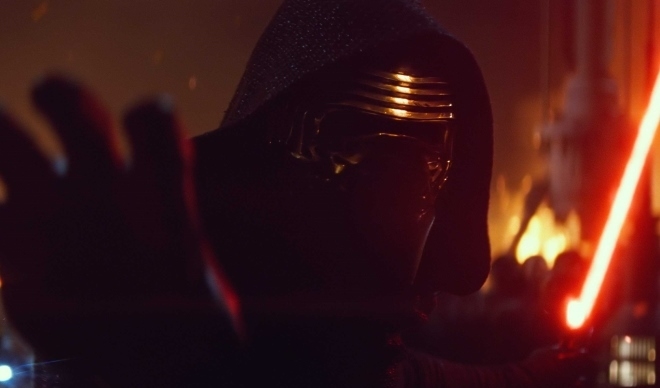 “Chewie, we’re home” states Han Solo as he reunites with the Millennium Falcon, at the same time neatly summing up JJ Abrams’ seventh episode in cinema’s most enduring mythology, Star Wars: The Force Awakens (2015). They’re important not only because they provide expectant hordes with a first glimpse of a craggy Solo (Harrison Ford), or because they tug on the nostalgia of the faithful, but because they plug in perfectly to the themes of history and legacy that fuel both the original trilogy and this new escapade. The Force Awakens barrels back into Lucas’ lived-in universe with boundless joie de vivre.

In the simple terms, this is the sequel that people have longed for since the credits rolled on 1983’s Return of the Jedi. Jettisoned is the tedium of trade disputes and microscopic organisms that plagued the prequel trilogy. The script – penned by Abrams, Michael Arndt and original trilogy scribe Lawrence Kasdan – harks back to the heroic cycle and the broad strokes of legend. There are the obligatory battles between good and evil, the light side of the force and the dark, but there are deeper recurring motifs about forging one’s own path and choosing the correct course through the tumult of the galaxy; “fly right through a star, or bounce too close to a supernova and that’d end your trip real quick, wouldn’t it?”

Lineage remains a key concern and may still prove even more vital in forthcoming instalments, but this film grounds its new characters in their own stories as well as buffeting them with the winds of the past. Daisy Ridley and John Boyega prove game additions to the cast, diversifying the protagonist pool undoubtedly, but are well cast Rey and Finn, respectively, imbuing them with personality and complex motivations that are often lacking in films of this ilk. For all of the thrilling action – of which there is plenty – the newly forged relationships and growing rapport provide just as much to savour. This is also evident in Oscar Isaac’s pilot Poe Dameron, who has the easy charisma of vintage Ford and almost steals the film.

Kylo Ren (Adam Driver) is another great addition, fascinating as the masked villain clad in black whose own internal struggles immediately grant him an unexpected level of complexity. Rey and Finn are not the only ones who must race to meet their destinies this time out. All the while, the recognisable faces of Han, Chewbacca (Peter Mayhew), Leia (Carrie Fisher) and C3PO (Anthony Daniels) bring with them the weight of the past bearing down; these are not the same people as thirty years ago – scars, wrinkles and new arms betraying past adventures and simmering regret. Occupying a position much like he has in the marketing campaign, Mark Hamill’s Luke Skywalker remains an enigmatic presence on the sidelines.

Able new support comes in the form the adorable BB-8, Lupita Nyong’o’s Maz Kanata and while Domhnall Gleeson seems a little miscast as a nefarious general, his pallid fanaticism gives dimension to The First Order who have stepped into the chasm left by the Empire. Small gripes such as this are insignificant next to the power of Star Wars, though. The films have always had a knockabout silliness to them and The Force Awakens turns out to be far funnier than might have been expected. More importantly, though, it keeps the story contained enough to function on its own terms and doesn’t just play on nostalgia but weaves memory and heritage into its very fabric – like some all-surrounding life force. It makes for a moving, rousing experience and the return to that galaxy far, far away that audiences have longed for.