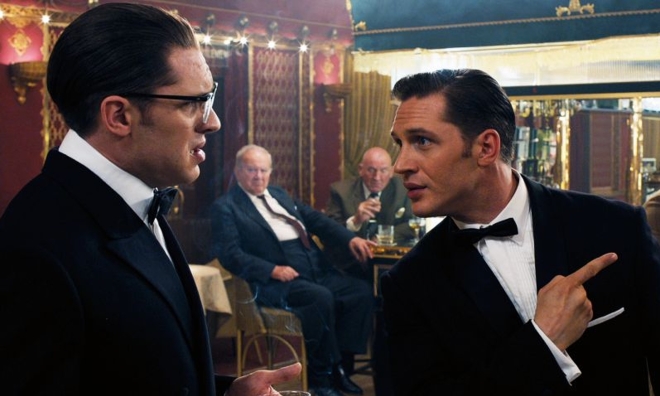 The latest feature from Academy Award-winning filmmaker Brian Helgeland, whose career has been peppered with a starkly varied series of films, from L.A. Confidential to postmodern period comedy A Knight’s Tale, Legend presents him with a fascinating canvas upon which to paint a portrait of two of post-war London’s most historically notorious figures – Ronnie and Reggie Kray. The true story of the euphoric rise and gradually destructive fall of the Kray Twins, the film – which proved to be an long-lasting smash at the UK box-office, making it one of the highest-grossing 18 certificate films ever – has all the ingredients to be a classic of the genre, yet a repetitive screenplay and pantomime levels of characterisations ultimately prove to be its wearying downfall.

Whereas Peter Medak’s similar humanising of the twins’ hold over East London, The Krays, cast Martin and Gary Kemp in the central roles, here Helgeland has the prolific British actor Tom Hardy playing both Ronnie and Reggie. This is a casting gambit that, thanks to Hardy’s poise and clear immersion and understanding of each sibling, really pays off. Starting in the early 1960s, the film charts the formative early years of Reggie, a former boxer and up-and-coming figure of London’s criminal underground, and Ronnie, an inmate of a psychiatric prison for his pathological violence and mental instability. When the latter is prematurely released, the Krays soon begin to transcend their native Bethnal Green and take over the city, expanding their reign by extortion, shady deals, muscling-in on a local nightclub and ensuring their presence is felt by whatever violent means necessary.
With Reggie’s life consumed by his unsteady marriage to the beautiful Frances Shea (Emily Browning), who initially turns a blind eye to her husband’s gangsterism, and Ronnie explosively spiralling out of control, the stage is set for power struggles and fierce competition to diminish the brothers’ bond and potentially cause their once-sturdy empire to collapse. Armed with Dick Pope’s learned cinematography (this is perhaps the most stylish looking British film in some time), Legend could have finally been the definitive depiction of the Krays yet. However, what Helgeland’s film amounts to is in fact a wasted opportunity to properly explore the iconic figures away from the obvious, surface-level iconography, too focused it is on visually texturising a time and place where the sixties were just beginning to swing.
Adapted from John Pearson’s 2011 book Notorious: The Immortal Legend of the Kray Twins, Helgeland’s shallow screenplay settles for a series of monotonous repetitions, where, for instance, numerous bursts of violence are followed by an obviously soundtracked (think Green Onions) montage ad infinitum. This is all tied together by the film’s most glaring misstep: having Browning’s Shea contributing a turgid narration, where lines like “A cup of tea can solve anything” mix with some genuinely tense dialogue sequences elsewhere. Easily the film’s strongest asset is Hardy’s portrayal of Reggie, a man constantly doing battle with his heart and violent head. Even if he is bogged down by, oddly, himself as Ronnie, who seems exaggerated to the point of a caricatured psycho with a perpetually blocked nose, Hardy gives all he can to a film that runs out of steam once the novelty of its numerous narrative ploys wears desperately thin.