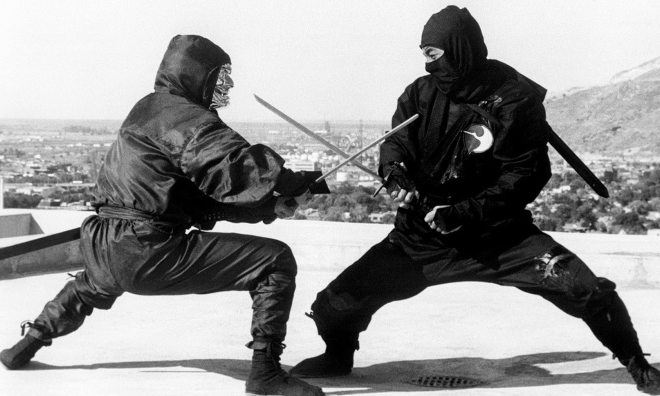 Aside from a couple of exceptions, Cannon Films’ Menahem Golan and Yoram Globus may not be remembered in the annals of film history as purveyors of quality cinema, but they certainly showed a skill for spotting and quickly capitalising on growing social trends. This is the duo who reaped vast box office rewards by bringing the breakdance phenomena to the screen with Breakin’ and the quickly cobbled-together sequel barely a later year. But three years prior to that, they crafted a cinematic response to the growing legions of adolescent fans in the west enthralled by the ninja mythos. The three titles in what would become a loosely-related chop-socky trilogy have now been restored and re-released via world cinema archivists Eureka Video.

Seeing these films receive the high-definition treatment will be particularly disarming for anyone who grew up viewing the pan-and-scan VHS versions via the local video shop – their picture quality constantly diminished due to multiple rentals. What gives these films their offbeat appeal and unintentional humour is the naivety of the filmmakers and a wildly divergent tone of each – owing to the hodgepodge of nationalities in front of, and behind, the camera. The first in the series, Enter the Ninja, has an Italian lead (Franco Nero) overdubbed with a Texas accent, and is directed by the Israeli-born Golan, who uses a Philippines setting populated with cockney henchmen. Opening with a colour-coordinated training scene where a lone ninja in white is pitted against a small army of black ninjas, the film‘s sparse narrative exists to simply connect one action set-piece to the next, with sporadic breathing space in between.

It’s the kind of undemanding entertainment which was enthusiastically lapped up by viewers during the early video rental era, and Golan has an ace up in his sleeve in the casting of his ninja villain Sho Kosugi – a genuine martial artist who is more than capable of delivering the requisite moves, even if his chops as an actor fall severely short of those he delivers to his opponents. Kosugi crops up as the hero in the sequel, Revenge of the Ninja. Now transposed to a US setting (but just as geographically disjointed as the first film) Breakin’ director Sam Firstenberg takes over in this tale of a uprooted ninja and his son (played by the star‘s six year-old offspring, Kane) as they become embroiled in a drugs turf war and clash with an array of awful stereotypes, including a “whatsa matter with cho?” Italian mob boss and stoic Native American hitman. With a ludicrous plot that wouldn’t look out of place in a 80s American Saturday morning kids cartoon, this is the very epitome of B-movie zaniness, from the hilariously po-faced dialogue (“only a ninja can stop a ninja”) to the questionable scenes of Kane taking on adults in hand-to-hand combat (and actually having his ass handed to him on more than one occasion). Once again it’s the final fight (this time an epically-staged rooftop battle) which is the film’s biggest selling point.

Last but by certainly no means least comes Ninja III: The Domination, the nuttiest by far of the three films. Presumably believing the formula was beginning to show signs of staleness, this time around the makers decide to add a supernatural slant. Once again, we‘re immediately dropped deep into the action as a mysterious evil ninja begins slaughtering a group of golfers (!?) before turning his sword against the trigger-happy cops on his tail. Succumbing to his injuries, his spirit is passed on to an unsuspecting phone repairer /aerobics instructor (Breakin’ star Lucinda Dickey) via a haunted arcade machine in her apartment. Dressed as the dead ninja, she begins to exact revenge on those who killed her unwanted occupant. Domination is a film brazenly unaware of its own deep absurdity, which makes it even more magical (the attempted exorcism midway through really has to be seen to be believed). Bringing some loose continuity to the series, Kosugi returns although he’s marginalised this time as a visiting ninja tasked with drawing out the spirit and defeating it. Cue yet another grand one-on-one to wrap up proceedings. This third entry is undoubtedly the crowning glory in a series of films that could hardly be described as classics of the genre, yet are never anything less than gloriously entertaining.