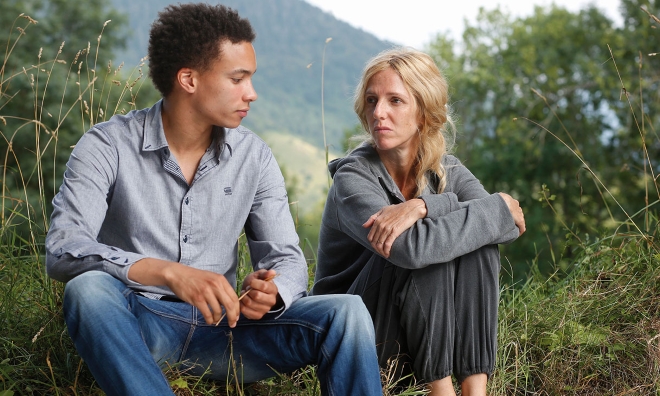 French director André Téchiné teams up with Céline Sciamma to write the screenplay for a tale of two young men struggling with their identities whilst living in the unforgiving landscape of rural France. Being 17, screening in competition in Berlin, introduces Damien (Kacey Mottet Klein) and Tom (Corentin Fila) as being somewhat close to each other on the social hierarchy, in a scene where the two are last to be picked for basketball at school. Tom’s relief when he is shortly chosen before Damien, is quickly usurped, when faced with Damien’s demonstrable intellectual gifts later in class. In retaliation, Tom lashes out, unable to express his frustration in any way other than violence.

Tom’s journey to school from his family’s farm involves a hike over the mountains and a bus ride, whilst Damien is driven by his mother Marianne (Sandrine Kiberlain), a doctor. When Marianne is called to Tom’s home to examine his mother, Christine (Mama Prassinos) she’s impressed by his attentiveness and sense of responsibility. Despite multiple miscarriages, Marianne insists that Christine take a pregnancy test and knowing that she is likely to have difficulty bringing the baby to term, she offers to let Tom stay at their house. Meanwhile, Damien’s father Nathan (Alexis Loret), an army pilot, previously seen only via Skype, comes home for a visit. For a while the four seem to cohabit peacefully, but Tom and Damien’s animosity, masking unrecognised desire, continues to break out in bouts of fighting.

With a central pairing that resembles the rich and poor, wild and spoilt dynamic of Wuthering Heights, set in a landscape just as dramatic at the Yorkshire moors, Being 17 builds slowly the development of its character’s feelings, as they fight against the identities they’re at first sure of. Both loners, never seen at school or elsewhere with other friends, it’s the intensity of their being thrown together that Téchiné and Sciamma use skilfully to draw out Tom and Damien’s burgeoning love. Whilst Tom’s moonlit wild swimming might be an unconscious indication of his sensuality, it’s Damien who tests most obviously the boundaries the two boys have created between them, by sharing his experiment in online hook ups up. “I don’t know if I’m into guys or just you,” is the first verbal acknowledgement of his feelings and one which is met with simultaneous excitement and repulsion by Tom.

Between Tom and Damien is Marianne, played by Kiberlain with a combination of homely pragmatism and girlish femininity that is occasionally too perfect a motherly mix. Marianne’s nurturing of both boys is the catalyst for their eventual, revelatory union, which when it finally happens, is performed with total conviction and generosity by both Mottet Klein and Fila. Being 17’s great strength is the two utterly engrossing performances given by its leads and their exhilarating chemistry is conveyed with equal sensitivity during their tussles, as it is in every small glance and gesture.