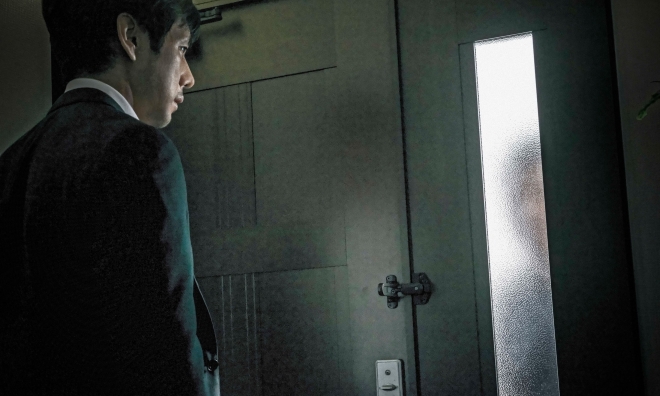 Creepy (Kurîpî) marks Kiyoshi Kurosawa’s welcome return to genre filmmaking. Based on the novel by Japanese author Yutaka Maekawa, Kurosawa’s latest does more than enough to warrant its moniker even if it fails to live up to expectations. Distinguished detective and criminal psychologist Koichi Takakura (Hidetoshi Nishijima) is called in to interview a young serial killer. There are, according to Takakura, three types of serial killer. The first two – the ‘organised’ and the ‘disorganised’ – account for the majority but there’s a third, far rarer and harder to catch type: a killer with “mixed characteristics”.

Before he can question him Takakura’s perp escapes and runs through the station, leading to a hostage situation in what amounts to an exhilarating animated opening sequence. Seven years later and Takakura has quit active service and moved to the suburbs to take a position as a university lecturer in criminal psychology. Unlike Kurosawa’s previous genre excursions, where stark urban landscapes are used to amplify the sense of alienation, Creepy relocates to the suburbs to explore the collapse of the family unit. At first Takakura appreciates the peace and quiet but his hunger for the past means it doesn’t take much persuading to get him to assist on a missing person’s case that was closed six years ago.

Kurosawa approaches the mysteries surrounding this case – and the film’s focus on the degeneration of the family – as an unsolvable crime to be examined but never resolved. Whilst Takakura immerses himself in the case, his wife introduces herself to their new neighbours including Nishino, a curious gentleman who greets her with an unnerving mix of hesitation and underlying hostility. Then, one day, Nishino’s daughter Mio appears at their door and reveals to Takakura a shocking secret. Fans of Kurosawa’s early work will welcome his return to genre with open arms. Constructing an elaborate web of narrative twists and turns, Creepy uses its procedural artifice to lead the viewer down a series of dead-ends creating a mood of dislocated terror by keeping the audience as confused as Takakura.

There are still a few laughs to be had along the way, with Kurosawa’s mischievous humour epitomised best in a talk given by Takakura to his students. He describes in a cold matter-of-fact fashion an American serial killer who tied and raped four prostitutes in a hotel room before flying them in a private jet to the mountains and hunting them for sport. His students faces are aghast with horror at the elaborate nature of the crime, before Takakura softens the mood by declaring “They do everything bigger in the US”. Uneven, convoluted and laden with far too many twists and turns Creepy sadly struggles to balance both terror and suspense, with any intrigue dissipating long before the film’s secrets are eventually unravelled.