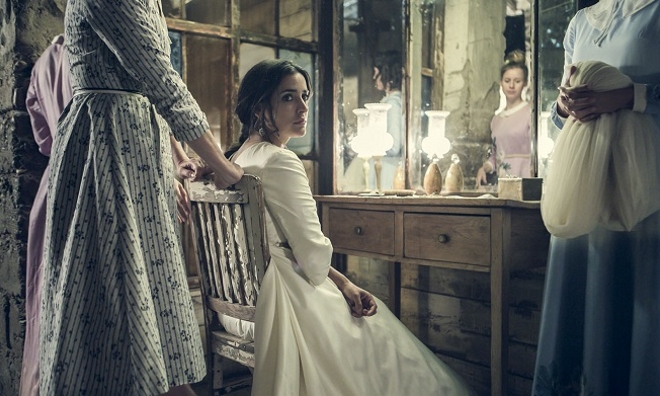 ★★★☆☆
The bold and deeply felt symbolism of Federico García Lorca’s famous matrimonial drama, Blood Wedding, makes it ripe for cinematic treatment. There are rich thematic veins to be opened in the writer’s text and his beguiling visual motifs are screaming from the page to be fully realised on screen. Carlos Saura’s flamenco effort Blood Wedding in 1981 is the most notably previous attempt to adapt the material and Paula Ortiz now has another crack of the whip in the form of the ravishingly beautiful and appealing, if somewhat unremarkable, La Novia – or The Bride.

Ortiz has opted for a somewhat simplistic presentation of Lorca’s multi-faceted classic, stripping away much of the social commentary and more lyrical top-notes in favour of suffocatingly repressed desire and gorgeous close-ups of hands skimming water and the touch of skin against cotton. The use of poetry and song to foreshadow tragedy is all present and correct, with Leonard Cohen’s Take This Waltz even making a late appearance into this unidentified mid-century Spain-ish milieu. “A voiceless lover. A crimson husband,” goes one of the mournful ditties and the inevitable calamity of the central love triangle hovers ominously in the air. Crafting a sandy glow half way between sepia and Instagram chic, Migue Amoedo’s lavish cinematography affects period authenticity and the arid locale until it suddenly closes in the throat, embellishing the stifling atmosphere.
The catalysts for this are a series of strange portents that begin to undermine the confidence of the eponymous Bride (Inma Cuesta) in her decision to marry her Groom (Asier Exteandia). Beginning at the end with an opening of operatic gusto (“I came so she could kill me”), the catastrophic conclusion has already been alluded to so it is clear when the ruggedly handsome, horse-rider Leonardo (Álex García) appears on the scene that he is trouble. He’s certainly the passion to the Groom’s reason, and is perhaps the earth to the Groom’s water as well – there are loose metaphors about fertility and the natural cycle and death being pointed throughout but they’re never satisfactorily embraced. Such supporting threads are generally left aside, much like the quietly fascinating fear of loneliness that drives the Groom’s mother (Luisa Gavasa), who veers between matriarch and Machiavelli, twisted by loss and harbouring a bitter grudge against Leonardo’s family.
Guavas totally steals the show in what is a generally torrid affair, full of lustful glances, and pained longing. This is Lorca by way of telenovela melodrama but with impeccable production values; the cast are uniformly stunning to look at, even when caked in mud, or matted by blood. While that is hardly likely to inspire searing trauma in its most thrilling and tragic moments, it does prove to be a winsome, albeit superficial, take on the source material. And it could hardly look better were it a dusty Spanish fashion shoot – you’ll not see a blood-streaked, lamenting bride look quite so unashamedly gorgeous.
International Film Festival Rotterdam runs from 27 January to 7 February. Follow our coverage here. La Novia is also available to stream via Festival Scope’s IFFR Live here.
Ben Nicholson | @BRNicholson
Facebook
Twitter
Pinterest
LinkedIn