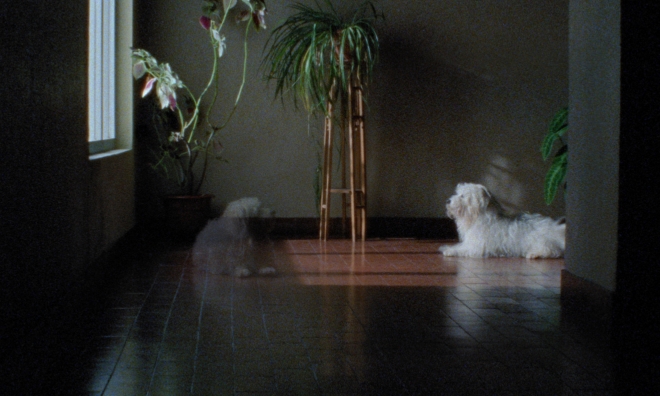 The second part in the Arabian Nights saga slowly but surely raises a middle finger to the Portuguese establishment. As its subtitle suggests the mood moves toward the disconsolate, the desperate and the disenfranchised. There’s a weary helplessness to The Desolate One which makes its overall tone far more sombre than the amusing oddity witnessed in The Restless One. Director Miguel Gomes applies the rule of three to part two of his trilogy. The Escape of Simao Without Bowels, The Tears of the Judge and The Owners of Dixie constitute three extended chapters, each narrated by the disembodied, omniscient voice of Scheherazade (Crista Alfaiate).

Gomes pushes the weird, wacky boundaries again here with drastically disparate stories told with witty, yet head-scratching guile. The Escape of Simao Without Bowels – a metaphor for a perennially slim man that presumably has a more poetic ring in Portuguese – opens to the sound of a police drone circling a lake. It searches the old man we see inexplicably pointing a rifle at a dog on its banks. In his feral appearance and existence, Simao (Chico Chapas) is a character out of time and place. Dry, tall grass crackles underfoot, crickets buzz in the midday heat and wind rustles through reeds as he roams the rugged foothills with the abandon of a western outlaw on the run, Gomes capturing the harsh beauty of the countryside magnificently. Assisted by ordinary folk who come to see him as a sort of hero, in spite of his crimes, the support they exhibit for a wanted murderer shows just how disillusioned the Portuguese people have become with authority.

This sentiment evolves slightly as we move into The Tears of the Judge. The image of male and female genitalia covered in virginal blood, perhaps a representation of the loss of innocence or de- flowering of a nation, is a rather shocking opening that gives way to a night-time court scene. A tenant’s theft of furniture from her landlord is the first of many dominoes to tumble in a “grotesque chain of evil, stupidity and despair” which evokes a sense of collective responsibility and culpability for the dire circumstances of those assembled in a crowded outdoor amphitheatre: thirteen Chinese courtesans, a deaf woman, a gang of masked demons, and a talking cow to name but a few. It’s an absurdist spectacle which is quite a struggle for the titular judge to handle but nonetheless a wonderfully high-minded sequence.

The Owners of Dixie, its central character a small white dog who spreads good cheer wherever he lives, brings us back down to earth with a bump as the trials and tribulations of tower block residents are chronicled. It brings the struggle of every day people into the frame; a couple of recovering drug addicts and an old couple in declining health are both failed by social services when in their greatest need. The Desolate One may leave viewers rather dejected but it’s another thoroughly delirious and thought-provoking two hours from Gomes.