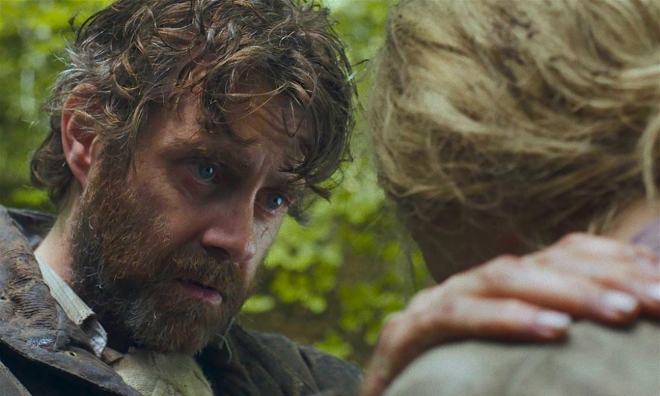 If you go down to the woods today, you’re sure of a big surprise. Living a survivalist existence to rival any of Bear Grylls exploits deep in the Pyrenean wilderness are John (Paul Higgins) and Karen (Kate Dickie). Not the post-apocalyptic tale that one might expect from such an opening premise, Belgian director Tom Geens’ sophomore film, Couple in a Hole, features a Scottish man and wife who have purposefully regressed to feral subsistence. The titular void represents both the physical hovel which they have chosen to inhabit and the figurative state of helplessness and desperation felt after a great loss. Deliberately paced, minimalist in its structure and plot, Couple in a Hole evokes a gripping and stridently unconventional depiction of grief.

In an intriguing and eerily quiet opening act John collects rainwater, forages for plants and chestnuts, and kills a rabbit he catches by smacking it against a tree, gutting the animal in savage close-up. Karen, so paralysed by sadness that she rarely steps outside the cave, stitches together furs to pass the time. Predominantly moving on hands and knees, the wild animalism of Dickie’s performance is remarkable. Weary resignation hangs from Higgins’ emaciated shoulders and his sullen, sunken eyes betray profound anguish. Dialogue is sparse to say the least, more important here is establishing the daily routine of two people who have seemingly been out in the sticks for some time. The why of this mysterious situation is revealed in steady drips of tantalising clues. Having lost an axe between rocks John ventures further afield to a derelict farmhouse. Appearing to be in familiar surroundings he quickly finds a replacement tool and tenderly folds a shirt, replacing it in a draw. Was this their home? Whose shirt is it? Why is he throwing small, leaf-wrapped gifts into the misty ravine nearby? With the only sign of civilization the distant sighting of an aeroplane, it’s hard to even know where we are. Geens does well to maintain our curiosity while the dark, verdant surroundings and sounds of nature accentuate the sinister air of malaise.

Events take a nasty turn when Karen is bitten by a venomous spider. Forced into the local village, which is surprisingly close, John receives help from good Samaritan, Andre (Jérôme Kircher), who obtains vital medication. Growing increasingly tired of his isolation and exasperated by his wife’s crippling inertia, a secretive friendship forms between John and the local farmer. A bond that threatens to expose the hiding place to inquisitive villagers, it could nevertheless reveal the full extent of a murky backstory; Andre and his wife (Corinne Masiero) are key to understanding why the local expats turned into elusive bushwackers. As the outside world encroaches ever closer and the secrets and lies begin to unravel so too, unfortunately, does the film and the coherence of its final act. In spite of the late wobble Couple in a Hole is still a brave, imaginative and accomplished film reinforced by tremendous performances.