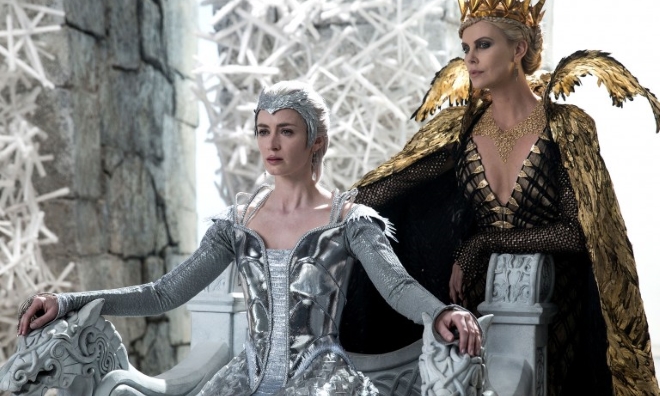 Four years on from Rupert Sanders’ critically derided yet financially lucrative Snow White and The Huntsman we have the delayed, inevitable follow-up: The Huntsman: Winter’s War. Chris Hemsworth is back as the axe-wielding hero in a loose retelling of Hans Christian Andersen’s The Snow Queen. In many ways this is an adult Frozen with Gothic sensibilities by way of The Lord Of The Rings, making for a derivative pastiche of the past two decades’ cinematic fantasy offerings. Replacing Sanders in the director’s chair this time around is former visual effects artist Cedric Nicolas-Troyan.

Nicolas-Troyan has managed to produce a series of visually entertaining set pieces, including an enjoyable skirmish with simian-like horned goblins, but they’re surprisingly small scale, lacking the grandeur typically associated with this genre. Like the first instalment, many of these battle sequences have a visual panache and characters are adorned once again by the magnificent costumes from Colleen Atwood, but even this winning combination is not enough to save it from the film’s own ill-paced plot. Evan Spiliotopoulos and Craig Mazin provide the screenplay which oddly tops-and-tails with the events of the first effort, whilst also writing out Kristen Stewart’s Snow White, save the odd passing reference.

Charlize Theron reprises her role as the king-slaying witch Ravenna, this time joined by her younger sister Freya (Emily Blunt), an initially fragile creature who, after the death of her newborn child, is transformed into a grief-stricken ice queen. Theron is still holding onto her determination to play the role as straight as possible. Blunt, meanwhile, gives a classy performance as the frosty Freya. Consumed by grief, she believes all must be spared from the pain of love (“Love is a sin”), so decides to steal children away and train them as her elite warriors, dubbed ‘The Huntsmen’. If Theron’s Ravenna is inspired – at least in part – by Disney’s Maleficent, then Blunt is a meld of Frozen’s Elsa and Tilda Swinton’s Jadis from The Lion, The Witch and The Wardrobe, making for one of the film’s more nuanced characters.

Completing a triptych of central female protagonists is Jessica Chastain as the sword-swinging huntswoman Sara. Chastain’s character is thinly crafted but what little she has she handles well, proving herself an enjoyable foil to the bravado of Hemsworth’s Huntsman. You would be forgiven for thinking that a film that puts three highly talented, respected female actors centre stage might have at least the inkling of a positive feminist message for a young teen audience. Sadly, each of the characters are essentially reactive to the actions of a man, in a plot determined to strike home the point that sisterhood is full of betrayal. Four years on from the first outing, this odd retelling of a classic fairytale for the teen market seems old hat. Thankfully, Matteo Garrone’s phantasmagorical Tale of Tales, starring Salma Hayek as a far more complex evil queen, is on the horizon and much more likely to entertain.